Telemetry  is a feature in Firefox that captures performance metrics such as start up time, DNS latency among others. The number of metrics captured is in the order of a couple hundred. The data is sent back to the Mozilla Bagheera servers  which is then analyzed by the engineers.

The Telemetry feature asks the Nightly/Aurora (pre-release) users  if they would like to submit their anonymized performance data . This resulted in  a response rate (number of people who opted in divided by the number of people who were asked) of less than 3%. This led to two concerns: small number of responses (which changed when Telemetry became part of  Firefox release) and more importantly representativeness: are the performance measurements as collected from the 3% representative of those of people who chose not to  opt in?

Measuring the bias is not easy unless we have measurements about the users who did not opt in. Firefox sends the following pieces of information to the Mozilla servers: operating system, Firefox version, extension identifiers and the time for the session to be restored. This is sent by all Firefox installations unless the distribution or user have the feature turned off (this is called the services AMO ping). The Telemetry data contains the same pieces of information.

Note: ‘everyone’ is almost everyone. Very few have this feature turned off.

We collected start up times for Firefox 7,8 and 9 for November, 2011 from the log files of services.addons.mozilla.org (SAMO). We also took the same information for the same period from the Telemetry data contained in HBase ( some code examples can be found at the end of the article).

Are start up times different by Firefox version and/or Source, where source can be SAMO or Telemetry.

Figure 1 is boxplot of log of start up time for Telemetry (tele) vs. SAMO (samo) by Firefox version. At first glance it appears the start up times from Telemetry are less than those of SAMO. But the length of the bars makes it difficult to stand by this conclusion. 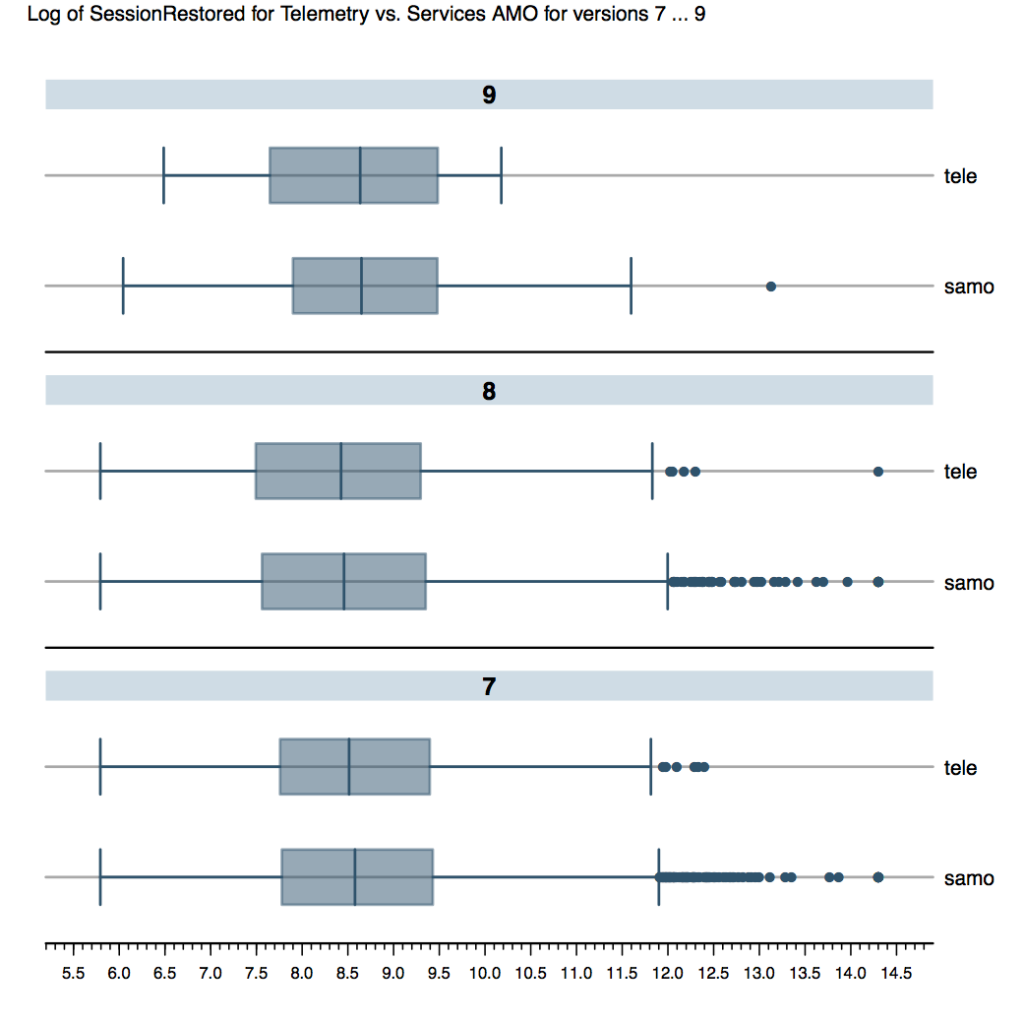 Figure 1: Boxplot of Log SessionRestored for Telemetry/SAMO by FF Version 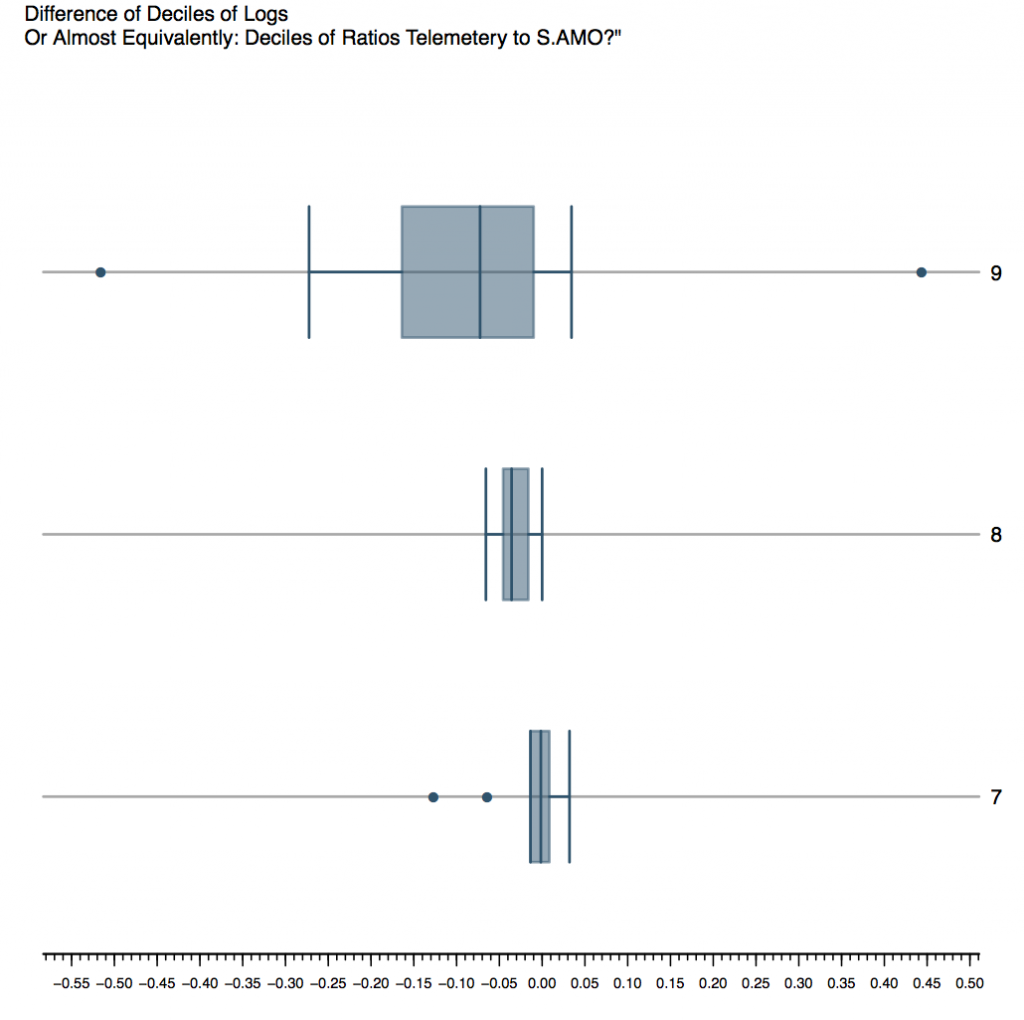 Figure 2: Difference of Deciles of Logs

In Figure 3, we have the mean of medians of 1000 samples: red circles are for telemetry and black for SAMO. The ends of the line segments correspond the sample 95% confidence interval (based on the sample of sample medians). The CI for the SAMO data lies entirely within that of the Telemetry data. This makes one believe that the two groups are not different. 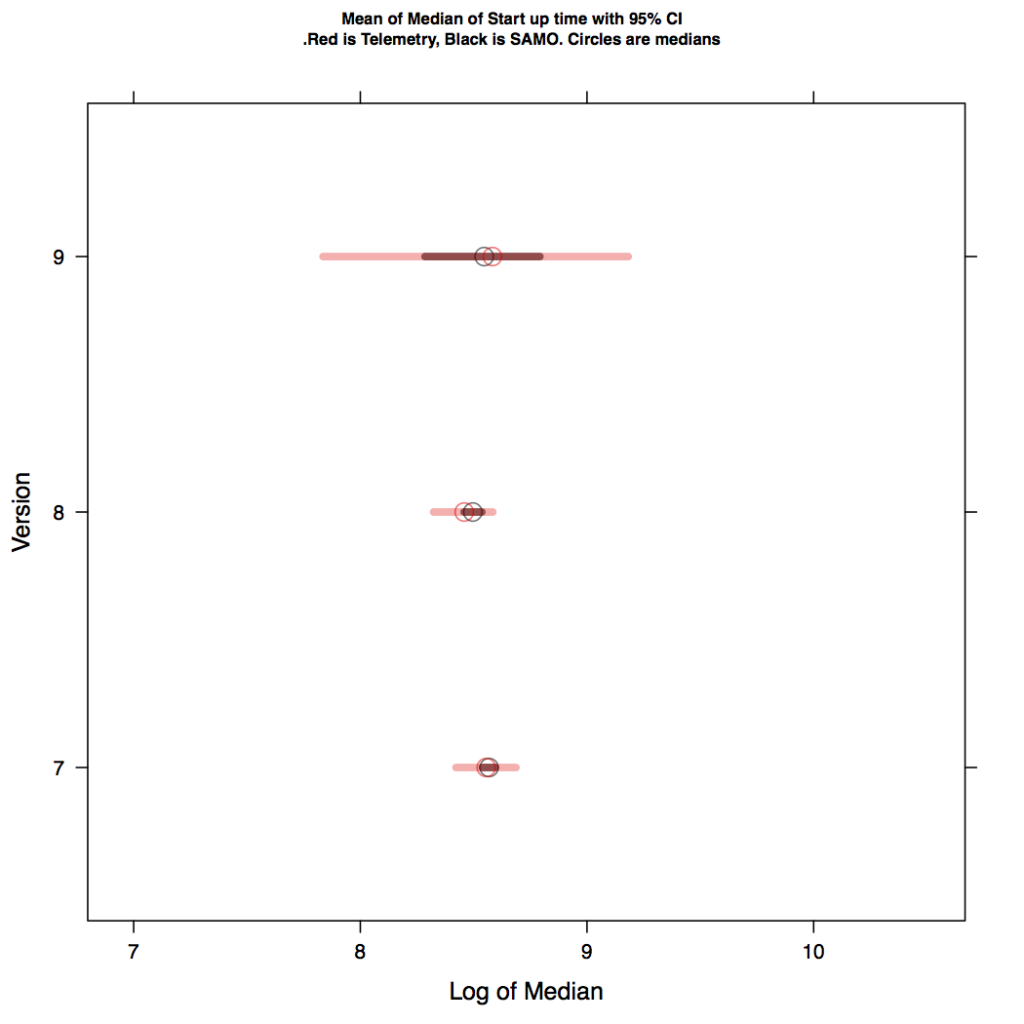 Figure 4: Mean of the medians (circles) with their 95% confidence intervals. Red isTelemetry, Black is SAMO

For a more numerical approach, we can estimate the analayis of variance components. The model is

(we ignore interaction). Since the data is in the order of billions of rows, I instead take 1000 samples of approximately 20,000 (sampling rate of 0.001%) rows each. Compute ANOVA results of each and then average the summary tables of the lm function in R. In other words we make our conclusions based on the average of the 1000 samples of ~20,000 rows each. ( I should point out that the residuals (as per a quick visual check) were roughly distributed as gaussian and other diagnostics came out clean)

The average ANOVA indicates does not support version effect or source effect (at the 1% level). In other words, the log of start up time is not affected by the version nor is it affected by the source (Telemetry/ SAMO).

This is good news! Insofar start up time is concerned, Telemetry is representative of SAMO.

A Different Approach and Some Checks

By now, the reader should note that we have answered our question (see last line of previous section). Two questions remain:

2. Why use samples? We can do a log linear regression testing on the 8000 cell counts (i.e all the 1.9 BN data points) . This of course loses a lot of power: we are binning the data and all monotonic transformations are equivalent. The model equivalent (using R’s formula language) of the ANOVA described above is

If the effects of binned_startup:src and binned_startup:ver are not significant this corresponds to our conclusion in the previous section. And nicely enough, it does!  Output of summary(aov(glm(…))) is

Some R Code and Data Sizes:

1. The data for SAMO was obtained from Hive, sent to a text file and then imported to blocked R data frames using RHIPE. All subsequent analysis was done using RHIPE.

2. The data for Telemetry, was obtained from Hbase using Pig (RHIPE can read HBase, but I couldn’t install it on this particular cluster). The text data was then imported as blocked R data frames and placed in the same directory as the
imported SAMO data.

3. Data sizes were in the few hundreds of gigabytes. All computations were done using RHIPE (R not on the on the nodes) on  a 350TB/33 node Hadoop cluster.

3. I include some sample code to give a flavor of RHIPE.