While October 24-26 marked the fifth official MozFest celebration, it was an exhilarating first for the newly formed Policy & Advocacy track. Before we wrap up the event, the Policy & Advocacy Wranglers want to share our thoughts and observations on the event.

This year, we broadened our focus from 2013’s Privacy track to involve the entire Policy & Advocacy community, celebrating the Web We Want and highlighting the global movement to protect the free and open web.

Our track featured more than 20 sessions spanning digital citizenship, kids safety, net neutrality, privacy, security, and anti-surveillance. The advocacy sessions shared the secrets of successful campaigns, the tools of the trade, and how to use trouble to your advantage. One session invited people to conceptualize a new Internet Alert System. The track also featured talks about current events and issues, including the surveillance ecosystem, net neutrality, and Do Not Track. Those looking to use or gain technical skills had the opportunity to join four consecutive Hackathons — ranging from creating mesh networks to creating data visualizations — and a ‘Humane Cryptoparty’, which emphasized a human-centered approach to privacy tools and practical advice and guides for self-hosting email.

Another unique session was our Privacy Learning Lab. The Learning Lab was an experiment to attract those who might want to consume and learn about privacy in smaller, less intimidating chunks. Participants could join at any time, and move through each of five tables, covering topics as diverse as location privacy, the Clean Data Movement, metadata, using Webmaker tools, and an eye-catching privacy game called OffGrid. Several of our Learning Lab participants also shared their ideas during Sunday night’s closing party demos. 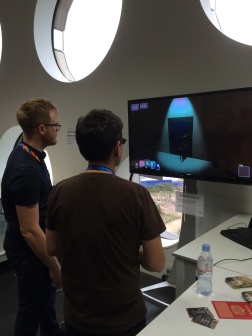 On the mainstage, we announced the Ford-Mozilla Open Web Fellows program, a new program recruiting tech leaders to work at nonprofit organizations that are protecting the open Web. The search is on for Fellows who will have opportunities ranging from the ACLU, where the fellow will work with the team that is defending Edward Snowden to Amnesty International, where the fellow will be at the center of human rights and the Internet, to the Open Technology Institute, where the fellow will work with the organization’s M-Lab initiative and serve as a data scientist for the open Web movement. Applications for the 2015 Fellows are still open, and the deadline to apply is Wednesday, December 31, 2014. 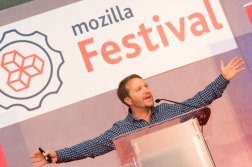 At MozFest, the interactive feel leads with the physical environment. The Policy & Advocacy track was housed high on the 7th floor of Ravensbourne, a media campus in the heart of London. In designing the right environment for our community, we planned several interactive displays to entice people to climb those stairs and fill those elevators to come see what we were all about. Our entrance included a ‘superhero photo booth’ which celebrated that we are all heroes of the web. Throughout the festival, people dressed up in superhero costumes, took selfies, and tweeted them to their networks with #WebWeWant.

Continuing into our space, two thought provoking walls invited interaction.  At the colorful “Web We Want” ‘chalkboard’ (inspired by Candy Chang’s iconic work, anyone could grab a chalkboard pen to express their thoughts about the web – a big hit with participants and videographers alike.  Colorful responses ranged from “built by people, fun and open!” to “decentralized”, “private”, “empowering”, “an explosion of creativity,” and so much more. 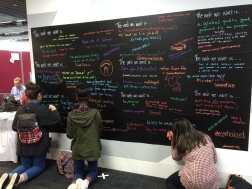 Another wall, based on a recent cross-cultural study on trust, invited people to write their personal definitions of transparency and privacy. On a central kiosk we just may have hosted the first-ever offline Reddit session (not intentionally, but when the Internet connection unexpectedly glitched, reddit quickly adapted with an innovative offline AMA). Using colorful post-it notes, participants expressed a set of principles and values important to the open Web.

As the first year for the Policy & Advocacy track, we were in prototyping mode. We were testing what works, what doesn’t and optimizing on the fly. We learned so many lessons that we’ll chew on for next year, but we’d also like to share a few here.

We were incredibly inspired by what an AMAZING Policy & Advocacy community exists and the immeasurable value of face-to-face interaction to share ideas and solve problems together. For us Wranglers, the most difficult part of the planning process was having so many amazing proposals to choose from and not being able to include them all. Indeed, we may have created too many sessions, not giving people enough time to explore the rest of MozFest.

Another thing we learned was the need to document what was happening in the sessions. We heard several requests for video (perhaps even Firefox phone) recordings, to enable people who couldn’t attend the festival participate and to mitigate schedule overload for the people there. We’ll pitch that idea to the organizers next year, along with additional Learning Labs as a way to share more ideas in smaller chunks.

All in all, this was a great MozFest and a terrific beginning for the Policy & Advocacy track. We’d love to hear your feedback — email us at advocacy@mozilla.com. We look forward to putting what we learned into practice for next year.