With the release of Firefox Quantum on November 14, 2017, we officially entered a WebExtensions-only world for add-on development. While that event was certainly the news of the day, Firefox 58 quietly entered Beta and a host of new APIs and improvements landed. As always, documentation for the APIs discussed here can be found on MDN Web Docs.

The API around themes continues to grow, allowing you customize even more of the browser appearance. In Firefox 58, you can now:

The API available for interacting with tabs continues to grow. Firefox reader view (or reader mode) strips away clutter like buttons, ads and background images, and changes the page’s text size, contrast, and layout for better readability. It can even read the page out loud to you, if you want.

The image below shows a page that can be viewed in reader mode, indicated by the page icon in the URL bar (circled in red). 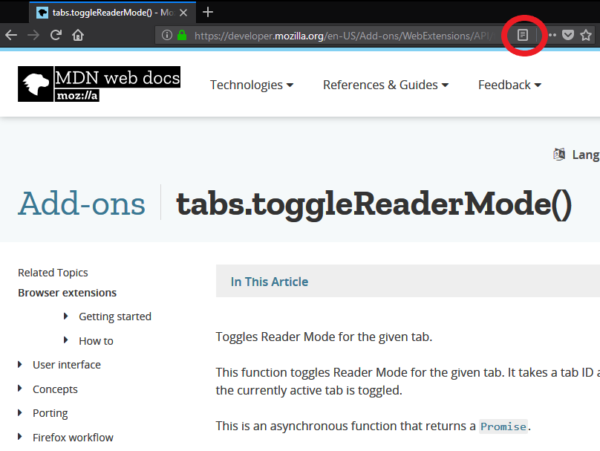 Clicking on the icon puts the page in reader mode, removing most of the page elements except the text and adding buttons to the left-hand side that modify the reading experience. 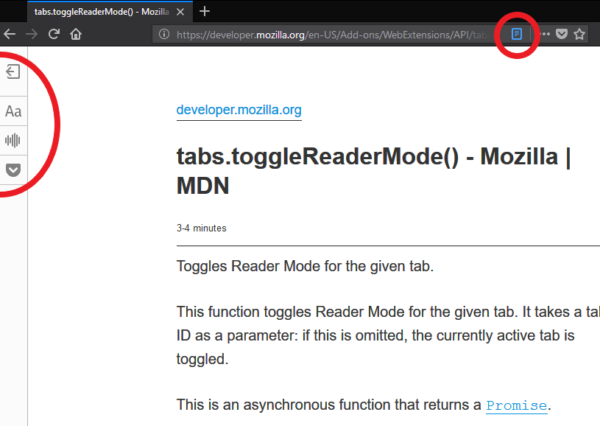 This powerful browser feature is now available via the WebExtensions API.

Extensions can now easily get the entire URL ancestor chain, even in an HTTP environment. webRequest.onBeforeRequest() now includes another parameter in its callback object called frameAncestors. This is an array that contains information for each document in the frame hierarchy up to the top-level document.

When a content script makes requests using the standard window.XMLHttpRequest or window.fetch() API, the Origin and Referer headers are not set like they would be when requests come from the web page itself. This is often desirable in a cross-domain situation so that the content script does not appear to come from a different domain.

However, some sites only allow XHR and fetch to retrieve content if the correct Referer and Origin headers are set. Starting in Firefox 58, the WebExtensions API permits the use of content.XMLHttpRequest() and content.fetch() to perform requests that look as if they were sent by the web page content itself.

Work also continues in the WebExtensions CSP area. Starting with Firefox 58, the CSP of a web page does not apply to content inserted by an extension. This allows, for example, the extension to load its own resources into a page.

This is a fairly large effort requiring some substantial architectural work. In Firefox 58, the first part of this work has landed, permitting basic injection of content generated by DOM APIs. There will be follow-ups for parser-generated content and inline stylesheets and scripts.

Using chrome_settings_override, an extension can now install a new default search engine by setting the is_default key to TRUE.  To protect the user, this cannot be done silently and the user will see an additional dialog that prompts them to confirm the change. 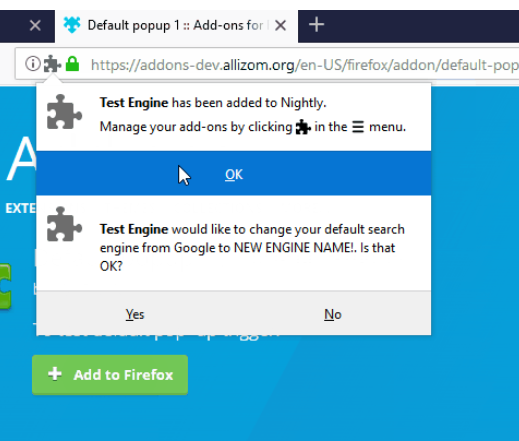 The user will also see if their default search engine has been overridden in the Options (about:preferences) page, which is explained in more detail below.

As the scope and power of the WebExtensions API increases, it is important to maintain the user’s security and privacy. In addition to the permission dialog that a user sees upon installation, Firefox tries to make sure that users are aware of which parts of the browser are under the control of an extension, and provide a way for them to revert back to default behavior, if desired.

Firefox 58 landed a couple of features in this area. First, when an extension has taken control of the New Tab Page, a notice is shown in Options (about:preferences) along with a button to disable the extension.  This is shown in the screenshot below. 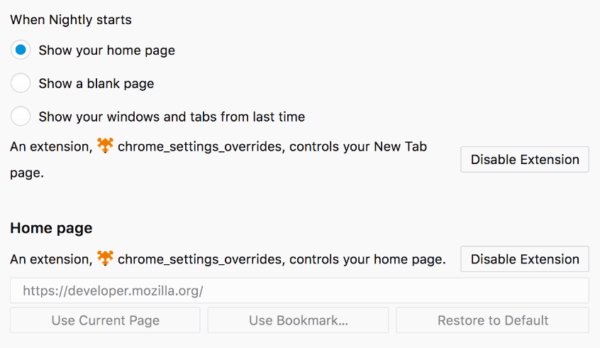 Along similar lines, if an extension has set a user’s default search engine, this will be shown on the Options (about:preferences) page.

Over the next few releases expect to see Firefox show even more areas where an extension is in control of a browser behavior along with options to revert back to a default state.

In keeping with Mozilla’s mission to protect an individual’s online security and privacy, two new browser settings related to user privacy are now exposed via the WebExtensions API.  Within privacy.websites, we’ve added:

A number of changes landed in Firefox 58 that fix issues with Browser Action buttons:

Firefox supports manual installation of external security devices via a dialog under the Options (about:preferences) screen. Now, WebExtensions includes API support for PKCS #11 security devices. Similar to native messaging and managed storage, a native manifest must be installed outside of an extension before the API become useful.

On Android, users get install-time prompts for WebExtension permissions, but under Firefox 58 they now also get prompts when an extension adds additional permissions at runtime.

The items above represent some of the bigger changes, but Firefox 58 landed a total of 79 items in the WebExtensions area. Thank you to everyone who had a part in getting Firefox 58 to Beta, especially volunteer contributors apoorvasingh2811, DW-dev, Tom Schuster, Kevin Jones, Ian Moody, Tim Nguyen, Tomislav Jovanovic, Masatoshi Kimura, Wouter Verhelst.

We continue to receive a lot of feedback from developers and, based on that feedback, work is progressing on new features for Firefox 59 and beyond. Expect to see the WebExtensions API improve and grow, particularly in regards to the organization and management of tabs, as well as the theming API. As always, thank you for using Firefox and helping ensure that individuals have the ability to shape the Internet and their own experiences on it.