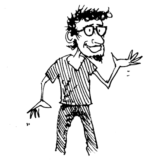 Please meet our newest Friend of Add-ons, Andrei Petcu! Andrei is a developer and a free software enthusiast. Over the last four years, he has developed several extensions and themes for Firefox, assisted users with troubleshooting browser issues, and helped improve Mozilla products by filing issues and contributing code.

Andrei made a significant contribution to the add-ons community earlier this year by expanding  Firefox Color’s ability to customize the browser. He hadn’t originally planned to make changes to Firefox Color, but he became interested in themer.dev, an open-source project that lets users create custom themes for their development environments. After seeing another user ask if themer could create a custom Firefox theme, Andrei quickly investigated implementation options and set to work.

Once a user creates a Firefox theme using themer.dev, they can install it in one of two ways: they can submit the theme through addons.mozilla.org (AMO) and then install the signed .xpi file, or they can apply it as a custom theme through Firefox Color without requiring a signature.

For the latter, there was a small problem: Firefox Color could only support customizations to the most popular parts of the browser’s themeable areas, like the top bar’s background color, the search bar color, and the colors for active and inactive tabs. If a user wanted to modify unsupported areas, like the sidebar or the background color of a new tab page, they wouldn’t be able to see those modifications if they applied the theme through Firefox Color; they would need to install it via a signed .xpi file.

Andrei reached out with a question: if he submitted a patch to Firefox Color that would expand the number of themeable areas, would it be accepted? Could he go one step further and add another panel to the Firefox Color site so users could explore customizing those areas in real time?

We were enthusiastic about his proposal, and not long after, Andrei began submitting patches to gradually add support. Thanks to his contributions, Firefox Color users can now customize 29 (!) more areas of the browser. You can play with modifying these areas by navigating to the “Advanced Colors” tab of color.firefox.com (make sure you have the Firefox Color extension installed to see these changes live in your browser!). 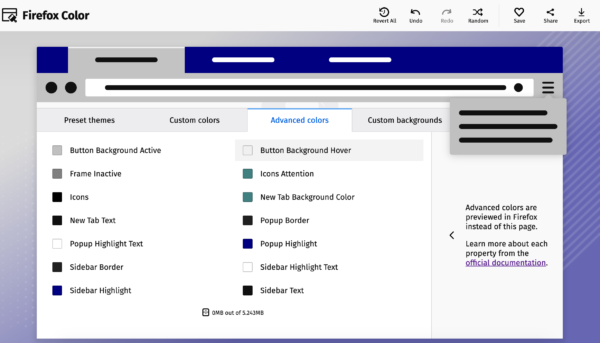 If you’re a fan of minimalist themes, you may want to install Firefox Color to try out Andrei’s flat white or flat dark themes. He has also created examples of using advanced colors to subtly modify Firefox’s default light and dark themes.

We hope designers enjoy the flexibility to add more fine-grained customization to their themes for Firefox (even if they use their powers to make Firefox look like Windows 95).

Currently, Andrei is working on a feature to let users  import and export passwords in about:logins. Once that wraps up, he plans to contribute code to the new Firefox for Android.

On behalf of the entire Add-ons Team, thank you for all of your wonderful contributions, Andrei!

If you are interested in getting involved with the add-ons community, please take a look at our current contribution opportunities.