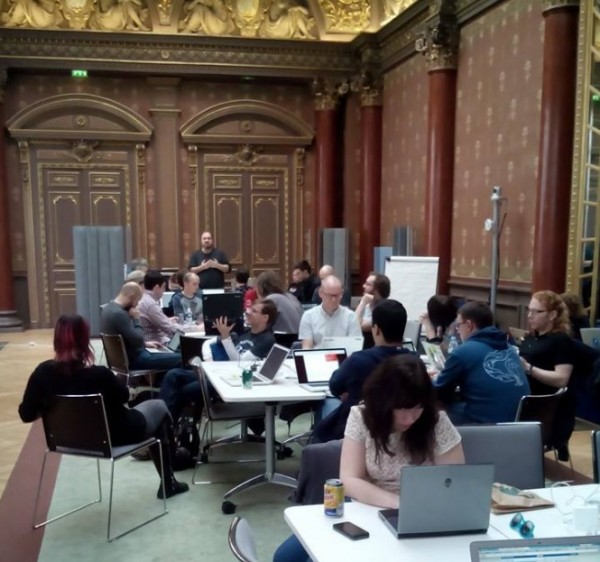 Over the weekend of March 7 to 9, about 30 Mozillians gathered at the Mozilla office in Paris to hack on various aspects of the Mozilla Developer Network (MDN) site: technical content, meta content (how to contribute), the platform code, and example code. Florian Scholz, who has been attending MDN meetups since the first doc sprint that was held in 2010, described it as “the best MDN event so far.” It was the first MDN event to bring together contributors with such varying interests, and from so many locations, including North America, Brazil, Europe, India, and Bangladesh.

The weekend began on Friday morning with “idea pitches” where participants described ideas for projects they wanted to work on during the weekend, and, importantly, the concrete outputs to be produced. These were captured on “task boards” — both a physical one on a whiteboard, and a virtual one on an etherpad. Participants then self-organized into groups to work on these projects. As projects were tackled, they moved from the “to-do” area of the task boards to “doing” and then “done.” There were periodic checkpoints for a chance to report on progress and ask for help. At the of the weekend, on Sunday afternoon, we had a “show-and-tell” to demo the results of the completed projects.

It wasn’t all heads-down work. There was slack built in to the schedule to allow for eating some wonderful Parisian food and seeing the sights of Paris. MDN Manager Ali Spivak led a group on a walking tour of her favorite chocolate and macaroon shops in Paris. And of course, being all together in the same place meant we got to make new friends and deepen online relationships with other MDN contributors.

Don’t just take my word for it. Here are perspectives on the weekend from two MDN volunteers: Priyanka Nag and Andrzej Mazur. At the end of this post, you can find a list of all the accomplishments from the weekend.

I am Priyanka, a Mozilla volunteer from India. About a year and half back, when I had attended my first MozCafe meeting, I didn’t understand all of the stuff people were discussing about, but those people were so super awesome and the mission towards which they were working was so very inspiring, I couldn’t help but join the group. Over the time, I fell in love with Mozilla.

I have attended a lot of Mozilla events (both local and global ones) but so far this was the best one for me.

MDN Weekend was my first Mozilla event where I got to work with so many Mozilla staff members. I had met some of them earlier during Summit or MozFest last year, but working with them for three whole days was more than a dream come true.

On the very first day of the weekend, everyone present in the room knew what they wanted to achieve in the next three days. The tasks were all documented in an etherpad and people started working on them in small groups. I was surprised to see that most of the tasks listed down were actually completed by the end of the three days.

The MDN weekend was the perfect example of ‘Work hard, party harder’. We worked all day and at the day break, we were taken to the best possible places in Paris for some awesome dinner and wonderful wine.

For me, MDN weekend was an experience of a lifetime.

The atmosphere during the MDN Weekend was very inspiring and motivating, I had the opportunity to directly ask questions about anything I needed because there was so many people way smarter than me just waiting to help. I teamed up with Francesco Iovine and we were working on a similar concept of the game using the accelerometer on mobile — he focused on the technical aspect of implementing the API and created the game from scratch while I built the game using the Phaser framework and focused on the workflow of creating the game itself. We had a lot of fun doing so, and had Chris Mills helping us with the writing.

After the weekend I ended up with a working demo of the game and a finished draft of the article — normally it would take me minimum a week or two to achieve that, but thanks to the awesome atmosphere I managed to do it in only three days! I plan to polish the article a bit, finish the game and publish it in the Firefox Marketplace. I hope it will encourage other people and show them that writing for MDN is very easy.

I’m truly amazed by the way Mozilla treat volunteers — we got ourselves a free flight and stay in a good hotel, tasty food throughout the whole stay from snacks and lunch to dinner in the restaurants and we were spending time in the beautiful Mozilla office in Paris. I’m also really impressed by the friendly and helpful approach — you could feel you’re with close friends and family.

I had the pleasure of flying to Mobile World Congress in Barcelona at the end of February where I was demoing Enclave Games’ game Captain Rogers in the Mozilla booth. This, the Mozilla Festival in October last year where I run a workshop about building HTML5 games for Firefox OS, and the lately MDN Weekend are the best three events I ever participated in.

I fell in love with Mozilla. You really feel you’re important — you can get all the help you need to achieve what you want. Contributing and giving back as much as possible seems like not enough for the support you get. I think it’s the best way to engage with the community and the MDN Weekend is a living proof of that. I would gladly go to any Mozilla Weekend in the future if I had the chance to do it, it’s the event where everybody wins. I’m really happy and thankful I was invited, I really encourage others to take part in it to see for yourself what you can achieve if you have a perfect conditions around you.

Here is a summary, pulled out of the “master” etherpad, of all the projects and tasks that were finished during the MDN weekend.

And in addition, Havi Hoffman seized the opportunity of having many localizers in the room, to demo and get feedback on Mozilla’s pilot project for app localization. Their input will be invaluable in improving the project, to help app developers like Firetext’s Joshua Smith localize their apps.

Looking back, I’m stunned by quantity and quality of these accomplishments. Like Priyanka and Andrzej, I found the weekend to be amazing and inspiring, and I agree with Florian that it was the MDN event (so far!). Many thanks to everyone who participated! It will be exciting to see if we can top it in the future.