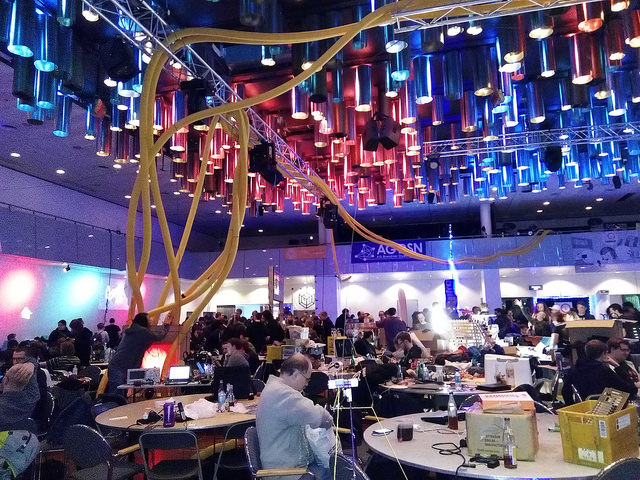 Entering the CCH (Congress Center Hamburg) between Christmas and new year brings you somewhere else than Hamburg on Central European Time.

Most people you’ll meet will say they are from Internet (or the Internets, if they are funny), and for a few days you’ll live in -what a friend of mine called- Chaos Time Zone: a blurry mix of everyone’s time difference. Days are pretty shorts anyway and you’ll probably spend a lot of time under artificial light, so it won’t help your internal clock keeping on track. The organizers will gently remind you the 6,2,1 rule: 6 hours of sleep, 2 meals and 1 shower per day, that should keep you safe. You’ll probably meet a lot of great people, and will often have a hard time to decide which talk or workshop to go to.
This is the 32nd Chaos Communication Congress. Welcome, and have fun! 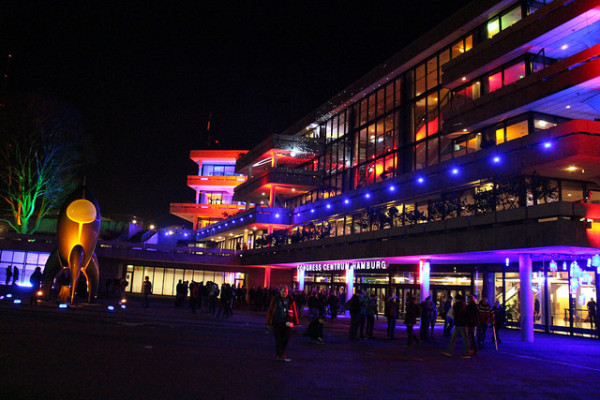 FxOS is not dead.

I looked for a screen printer, or anything to do myself a t-shirt with the message “Firefox OS is not dead!” on it, but very surprisingly regarding the variety of machines there, I couldn’t find any on site. I really wanted to do that, because most of the people I talked to about
Firefox OS answered me “But isn’t Firefox OS dead?”. I bet it won’t come as a surprise for you, as there was a lot of feedback from the community regarding what some might call “a PR disaster”. It just made it very clear to me that we (still) have to communicate a lot on this topic, and very loudly, because the tech news websites will be less likely to spread the word this time.

Once this detail (*cough*) was clarified, almost everybody I had the chance to talk to showed a lot of interested for the project, the only ones who didn’t were the hardcore Free Software enthusiasts, whom have been disappointed by Mozilla recent policy choices (like the tiles with
advertisement, or the DRM support in Firefox desktop), or the people who care less about software freedom and prefer an iPhone to a free (as in freedom) mobile OS. 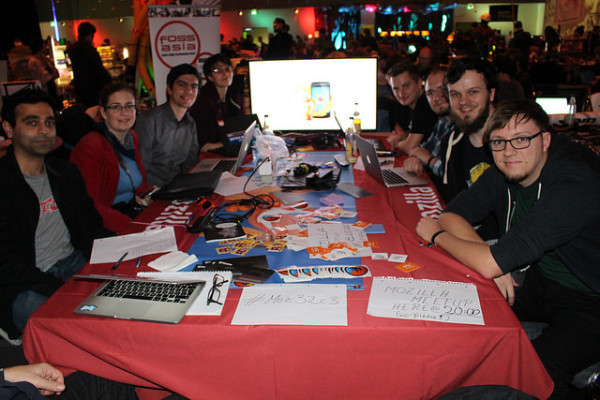 Mozilla and Firefox at 32C3 with friends – Photo: Mario Behling

Mozilla has a pretty good image in the Free Software community, and the main reason why people never tried a Firefox OS device is only because they never had the chance to do so (not many devices marketed in Europe or the US, not many ports on mainstream phones). Fortunately enough, I had some foxfooding devices to hand out. The foxfooding program had a very positive reception, most people were happy to have the chance to try the OS, participate in sending data to Mozilla, file bugs, some were eager to develop apps, and try port the OS on their favorite phone or device (the RasPi got a bunch of them very excited).

More importantly, they really asked me how to flash a device, where to find the documentation to get started, how to file a bug. The people I handed a device to planned to show it to their colleagues, friends and fellow hacktivists, and were very excited to have phone with a hardware good enough to provide a responsive experience.

“Is there a Signal app or any secure messaging app?”
“Can I use Tor?”
“Can I keep OSM maps in cache?”
“Is there an app for WhatsApp?”
These were the questions I was asked the most. It’s pretty expected that the hackers community is looking for reliable privacy tools, but I was a bit surprised by the last question that still came up several times. 🙂

An assembly is the name the Chaos Communication Congress gives to the physical place (typically a bunch of tables with a power outlet) within the CCH where people can gather to hack, share ideas and have self organized-sessions on a particular topic, or around a particular project, there were 277 registered this year. 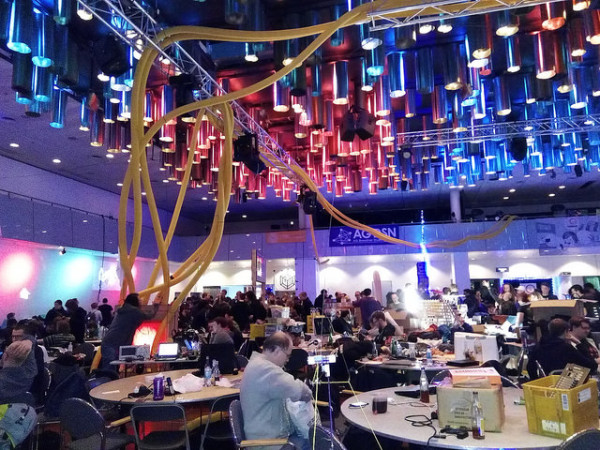 With the Mozilla Assembly, we had several sessions (directly at the Assembly or in dedicated rooms) over these 4 days:

On average, there were around 15 Mozillians at the Assembly and a continuous flow of people from different community.

Other projects where Mozilla is involved were represented, like Let’s Encrypt, with a talk so successful that the conference room was full, and New Palmyra, for which Mozillians organized a session for 25 participants.

The hackers and makers communities have a real ethical and practical interest in a mobile or embedded OS that’s trustworthy and hackable, we bear similar values and Firefox OS is a great opportunity to strengthen the ties between us.