We’re pleased to introduce the Firefox Share alpha add-on, a spinoff from the F1 add-on you may already be using. Firefox Share is a descendant of F1, but it differs in a few significant ways that we’ll describe below. We’d love for you to try it and send us feedback to improve it.

We’re developing Firefox Share as an add-on so it can evolve in parallel with the rest of Firefox. Firefox Share works with all current Firefox versions. 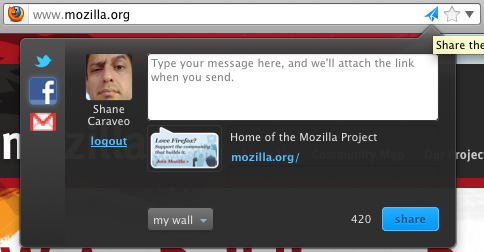 While Firefox Share is derived from F1, there are changes in the interface and under the hood:

One other note: Since this alpha has been focused primarily on the re-architecture, we regret that we’ve had to drop a couple of features, including support for LinkedIn, Google Apps, Yahoo, and multiple accounts per service (e.g. multiple Twitter accounts). We hope to add these back over time in upcoming releases. We’ll keep you informed as Firefox Share continues to evolve and moves out of alpha.