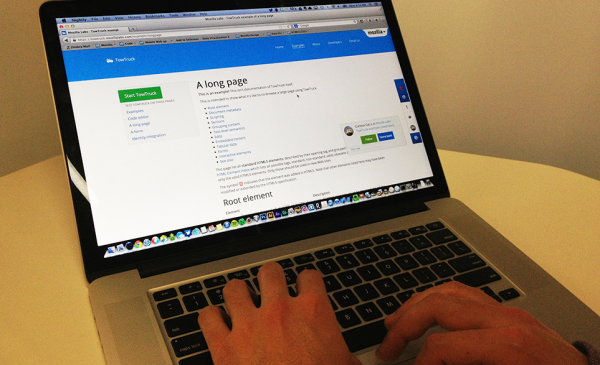 We recently conducted a one week in-house usability test with Mozilla staff to gather feedback and problems with the current product so we could improve the experience.

We received great feedback and we wanted to share that information with you TowTruckers out there! Our users uncovered many problems (listed below) and we are working hard to fix these issues.

Problems discovered
Here is a list (but not all) of the problems our users encountered during TowTruck Alpha user-testing.

We are currently working to fix these issues and they’re documented here and here.

The Methodology
We gathered ten participants (thank you user-testers!), who had various backgrounds, skill levels and prior knowledge of TowTruck. We then ran one-on-one sessions for approximately twenty minutes each. The last session we ran included two participants to test a real-time multi-user experience.

We went through a few scenario iterations, ranging from trying to use the Firefox Add-on, to cloning existing sites like kayak.com and adding TowTruck to it, to making fake-sites like these:
Odyssey site
Math problem

We ended up using the TowTruck Examples pages. This worked okay because there were fewer bugs, but there was some user confusion. For example, users had to imagine being in an actual scenario like “working on coding a website,” when they were on this sample Code Editor page which didn’t match interactions and context completely.

Here is the example for Scenario #1 instructions:

As the participant went through the tasks and scenario, they were asked to narrate their thought-process. We found specific pain-points and problems in the flow, from what they said aloud to just observing where they clicked on the screen. Some interactions were cumbersome and awkward, like “creating your profile name” and some UI elements were confusing like the “hangup button.”

During one of the sessions, we “declined to join a session.” This was never tested before and we found all sorts of bugs and problems with that flow.

Normally, it’s best to cluster the feedback with post-it notes and add them to something like Evernote, but wanting to move fast, we threw the notes in Evernote, then went back and watched through the videos to double-check them. The notes were then converted into Github Issues with the Issue tag “user-feedback-Alpha” here.

Conclusion
It’s always great to have some fresh eyes look at the product, use it and break it. Often, when heads-down creating the product, the product-creators get used to certain flows, UI elements, and interactions that they don’t feel strange/awkward anymore, and subconscious work-arounds are created to complete those tasks.

If you’d like to review the feedback, you can see Github Issues with the Issue tag “user-feedback-Alpha” here or you can check out what we’re working on for Milestone Alpha 4.

We love feedback, so feel free to add TowTruck to your site or app and let us know what you think here!