Several months back we discussed a project called Funnelcake. The goal was to begin to understand the path of Firefox users from download all the way through to long-term usage and to see if there were any pain points along the way for our users.

In terms of numbers, we found that 57% of downloaders successfully installed Firefox, and of this smaller cohort, 49% were retained as active daily users thirty days later. Presently, we’re about five months removed from that original time period, so we thought it would be interesting to see what those numbers look like today. In other words, of the group of people who downloaded and installed Firefox on October 4, 2007, how many are still actively using the browser in February 2008? 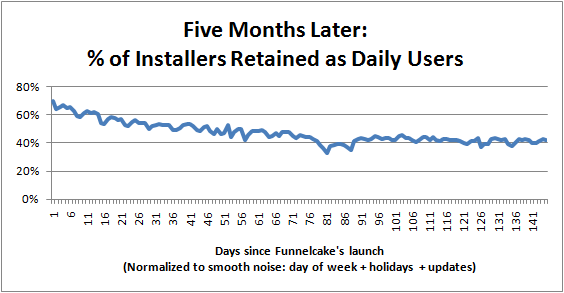 You’ll see in the chart above that there has been very little drop-off in usage over the past few months. While 49% of installers were still using the browser thirty days later, that percentage has decreased only to 42% nearly five months after the fact. Wow!

This means that Firefox is sticky, really sticky. It means that if someone used Firefox shortly after installing, they’re likely still using it regularly (or daily) five or six months later.

Here’s another way to look at it: five months after users downloaded just two locales (en-US & de) of Firefox on a single day (24-hour period), we see approx. 40,000 of these users each and every day. That’s a mind boggling stat, and only possible because of the amazingly hard work of thousands of contributors.