We’ve known for a long time that several Firefox product pages (e.g., download.html) are closely tied with the Firefox user experience.  What we didn’t previously know is exactly how closely our community’s interaction with www.mozilla.com speaks to Firefox’s global reach.  As recently mentioned, we’ll soon have a much more structured dialogue around the international impact of Firefox, but before we get to that, we wanted to point out another somewhat surprising fact:

Even though the two metrics are measured by two separate systems using two different geoip technologies, and even though the product page experience can differ by Firefox build and locale, and even though we have several separate international web properties (e.g., mozilla-europe.org, mozilla-japan.org, mozillaonline.com) that we’re not including here – after considering all of these things, when looking at a breakdown of visitors to www.mozilla.com we see a pattern that almost exactly mirrors actual global usage of Firefox.

Similar to what Schrep previously highlighted, our analysis is below.  Usage of Firefox by country is in the second column and a breakdown of visitors to www.mozilla.com is in the third column (both are % of total).  These numbers are from the current month of May (thus far). 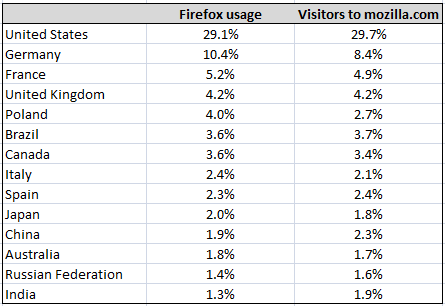 So, what’s the main takeaway here?  Web analytics is critical for Mozilla.  The ability to take a partial temperature of the Firefox user experience on a per country basis and help fix any pain points for our users should be a big win for the Firefox community.