A couple months ago, we speculated on what the Firefox 3 universe would look like approximately one month after launch.  In that analysis, we took our download and usage numbers from the time period following Firefox 2’s launch in 2006 and extrapolated from there.  We’re now exactly one month removed from Download Day, so we wanted to update that discussion and see how close our guesstimates were for Firefox 3.

Specifically, how many cumulative downloads of Fx3 have we seen since Download Day and were does the “Active Daily User” number for Fx3 usage stand today?  Below you’ll see this snapshot analysis, along with a comparison to the launch of Firefox 2: 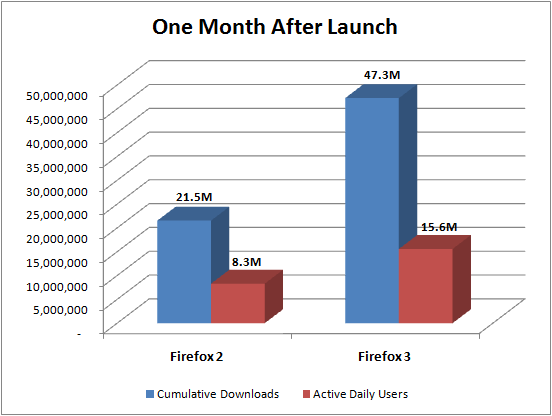 The numbers above match fairly well with our original predictions.  So, how else can we interpret these results?  One pattern that stands out is the conversion percentage, i.e., how well downloads are translating to active daily users.  Dividing the “red” number by the “blue” number, you’ll see that the conversion rate was approximately 38.5% during the first month of Fx2 and has been approximately 33% during the first month of Fx3.  This could merely be a seasonal effect… or perhaps this tells us that there’s a little room for improving the user’s experience from download to install and from install to long-term usage.