The world of Mozilla includes many Firefox related feedback mechanisms.  Crash reporting, bugzilla and spreadfirefox.com represent a few such examples.  Another feedback mechanism is the Firefox uninstall survey.  When a Firefox user (Windows XP only) decides to uninstall their browser, they’re asked if they want to complete a survey during the uninstall process.

Often a user is merely temporarily uninstalling before immediately reinstalling.  However, in some cases a user enjoys a seemingly less than optimal experience with Firefox, and in these cases, it behooves us a community to figure out what’s going on and if there are true pain points that the user is experiencing (and perhaps that we’re not aware of).

Since its implementation in March of 2006, well over a million users have visited the survey.  Together, they have submitted over 170,000 responses.  In a typical day, we might see something in the ballpark of 4,000 visitors, 150 responses, and 40 comments.

Given both the magnitude and value of the resulting information, I’ve been dedicating part of the summer to analyzing and interpreting the data.  This blog post is the first in a short series.

So what do the uninstallers have to say?  There are two particularly interesting results, the first of which is plotted in the chart below. 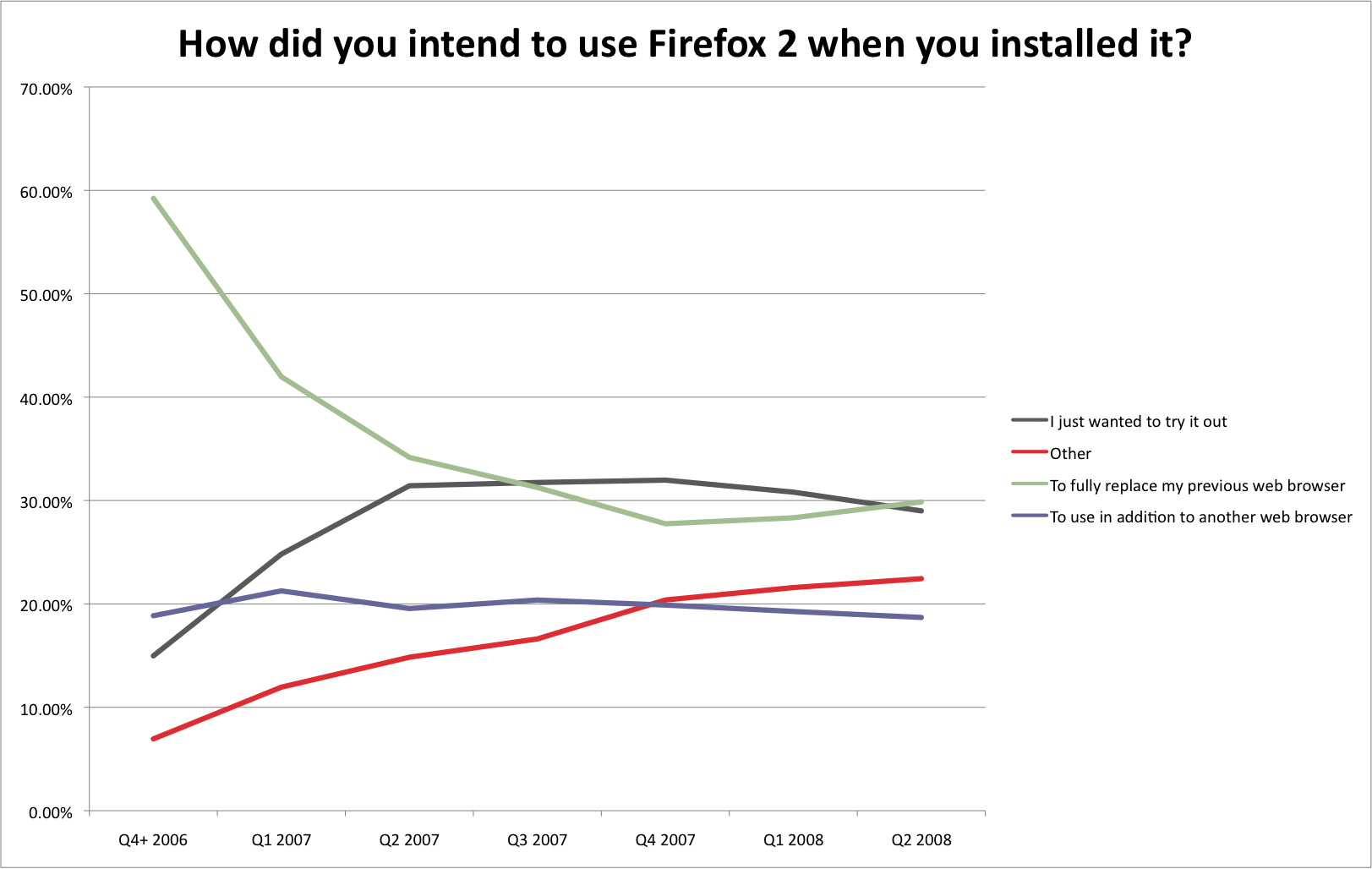 The second result concerns how well each country is represented by visits (not responses) to the uninstall survey.  The charts below illustrate the degree to which each of the top eight survey-visiting countries is overrepresented. 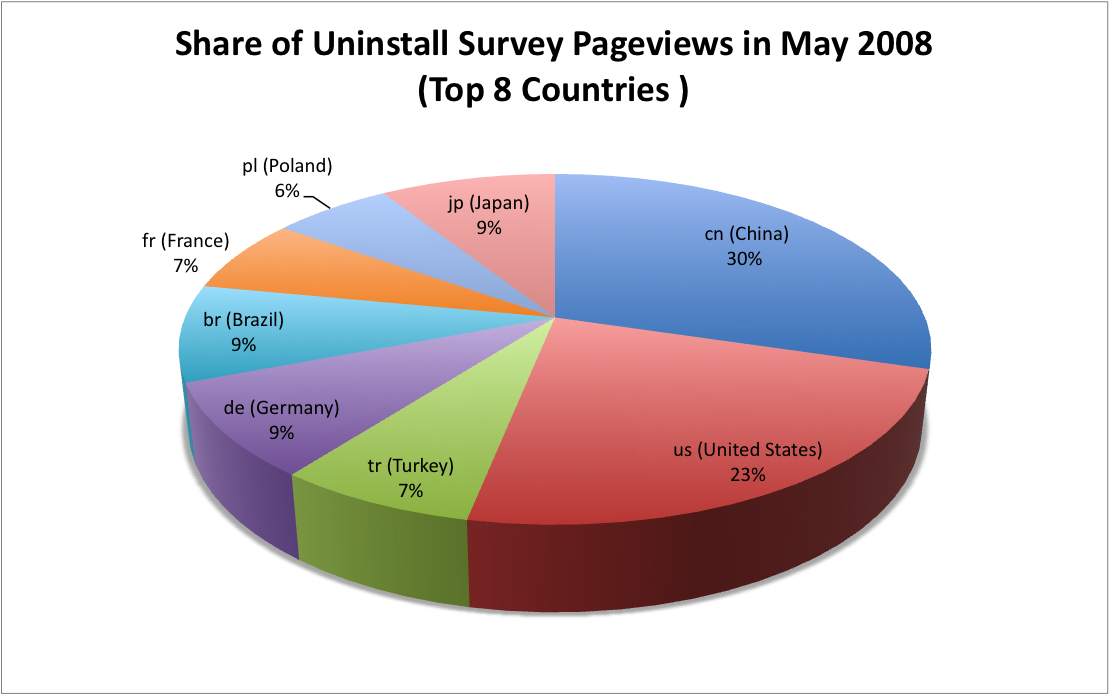 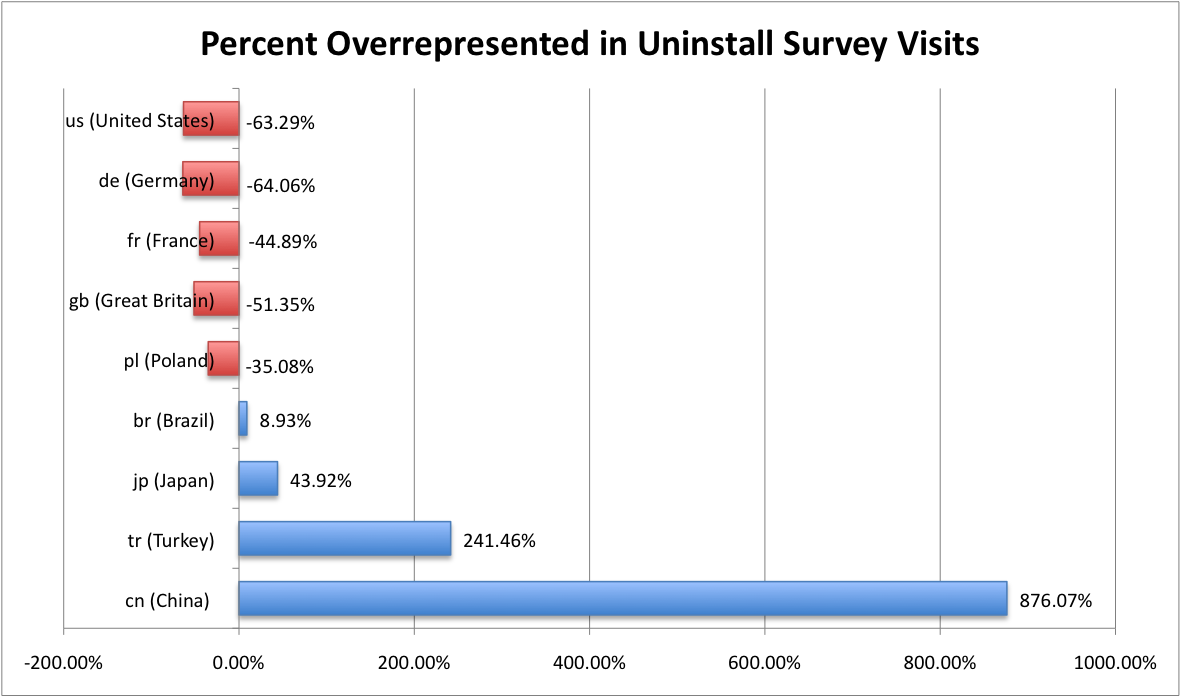 Clearly, China is the outlier.  Despite comprising only 1.9 percent of active daily users, Chinese users account for 18.6 percent of visits to the uninstall survey.  We are still looking for possible explanations as to why Chinese users respond so much more frequently.  Are they culturally more inclined to fill out surveys? Do they uninstall Firefox at a higher rate?

The survey data is publicly available at survey.mozilla.com.  At this stage, we are looking for suggestions as to how to improve the uninstall survey and, ultimately, improve the user experience.