We’ve previously talked extensively about one of Mozilla’s core marketing tactics – search engine marketing.  One of the questions we always come back to is: “what macro level effect does this activity have?”  In other words, we know this channel is driving clicks and Firefox downloads every day, but is this effort actually aiding Firefox adoption in some way?

This thought might seem anti-intuitive.  If these marketing campaigns are driving a mass number of clicks and downloads, of course it *seems* as though we’re having some small impact on Firefox adoption.

Below are the findings when looking at Firefox download numbers on a macro-level, i.e., across all channels, locales, etc.  This is a very large macro-level number, and the traffic seen each day via search engines is only a small part of the overall story, so as one would expect, it’s difficult to see an effect. 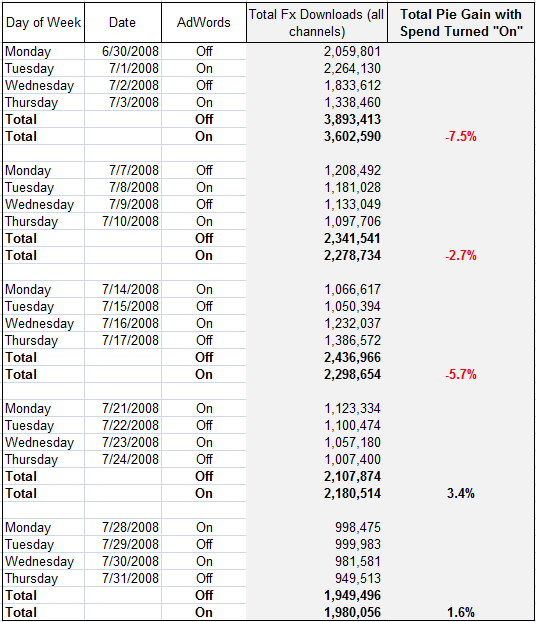 Fortunately, we can drill down into the data a little further.  Below are the findings when looking at Firefox download numbers solely through Google.  The numbers represent all downloads through that single channel, i.e., via both organic search results and paid advertisements. 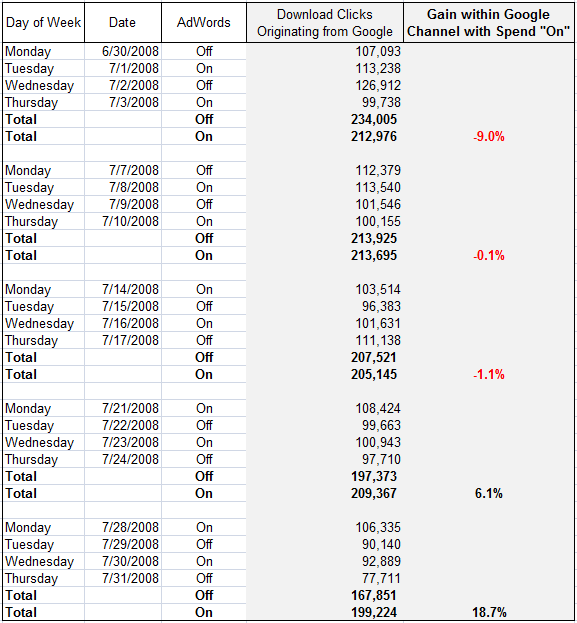 Are these results surprising?

Our previous experiment (with a more limited scale), showed us two things:

This latest experiment suggests that that initial finding could hold true, but it also makes clear the fact that the answer to our original question (“do search campaigns aid Firefox adoption in any way?”) remains somewhat inconclusive.

We want to make sure we’ve done a fully rigorous job here, so please comment with your thoughts if you have a different take on these numbers and analysis.