Web technology moves quickly, and we at Mozilla do our best to balance our values of keeping users safe and secure with also ensuring that we are giving users the ability to make choices about the software on their computers. We can’t keep up with the cost of providing security updates to older versions forever, though, so we’ll often try to encourage users to migrate to the latest version. A few weeks ago, we made another such offer to our Firefox 3 users, explaining that we were not planning on supporting that release anymore and asking them to upgrade to Firefox 3.6: 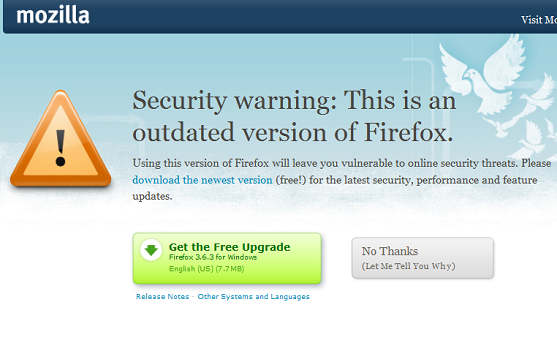 In the past, soliciting feedback from users has helped us understand why users were opting to not upgrade, so this time around, people who clicked on the “No thanks” option above were directed to a survey. Over 40,000 people were kind enough to share their thoughts with us.

So what do the results look like this time?

Let’s start by taking a look at responses to the first question: 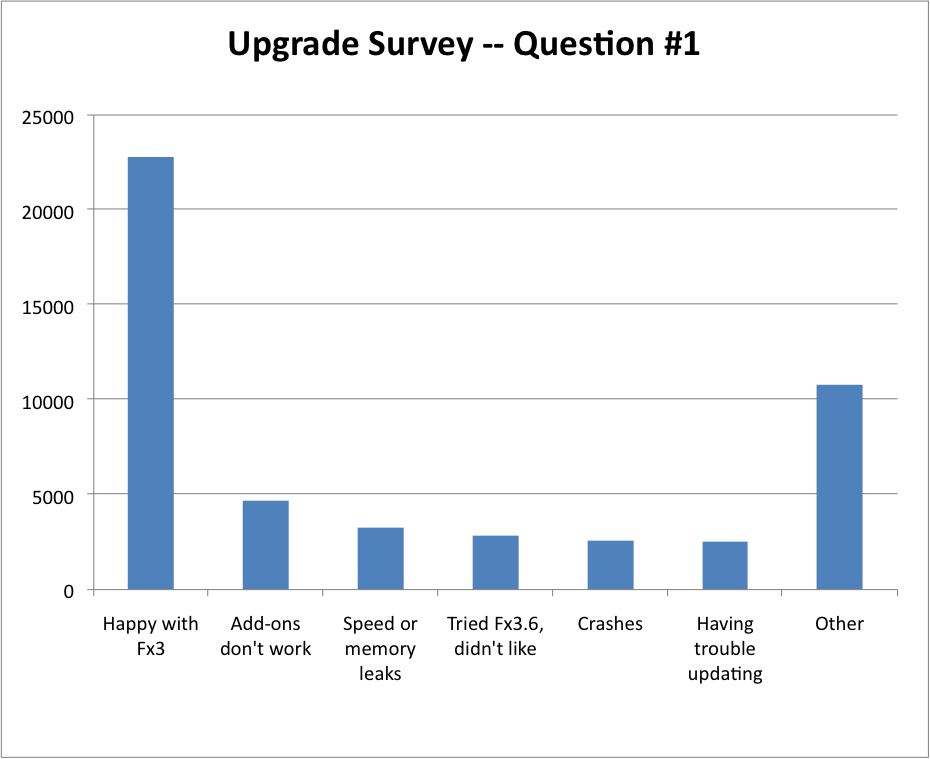 Over half of the respondents stated that they were simply content with Firefox 3. And compared to what we saw last survey, far fewer users selected “Other reason.” Still, a quarter of users took the time to give an alternative explanation, so exploring these answers can definitely help us gain additional insight. A list of the most common phrases entered into the “Other reason” text field is presented below: 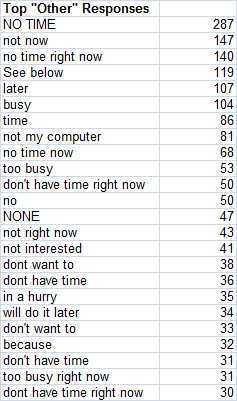 The lack of comments about costs is a pleasant surprise. Acting on feedback from the last survey, we revised the update prompt, highlighting that the upgrade is free in two places. It seems that this simple addition was enough to eliminate most of the confusion.

The update prompt itself may also partly account for the rise in “no time” comments. With prior upgrade initiatives, users saw an advertisement and button similar to what you see below: 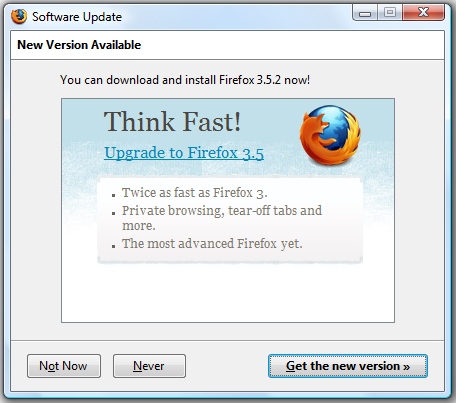 Users could then click “Get the new version” to initiate a 30-second update procedure. This time, however, instead of seeing a typical software dialog box, people encountered the update prompt via the Firefox “Whats new” page and were presented with the customary green Firefox download button.  Hitting the button also initiated the update, but via the more involved process of downloading and installing a fresh version of the browser.

Pushing out the update in this way was a one-time situation, and we’ll revert to the usual process and software dialog box in the future. To alleviate this issue further, we should also perhaps add to the prompt some indication that updating Firefox is relatively quick and painless.

Next, lets turn to Question 2. This was a free form text box so we manually read through a random sample of 10% of the responses and parsed them into categories. 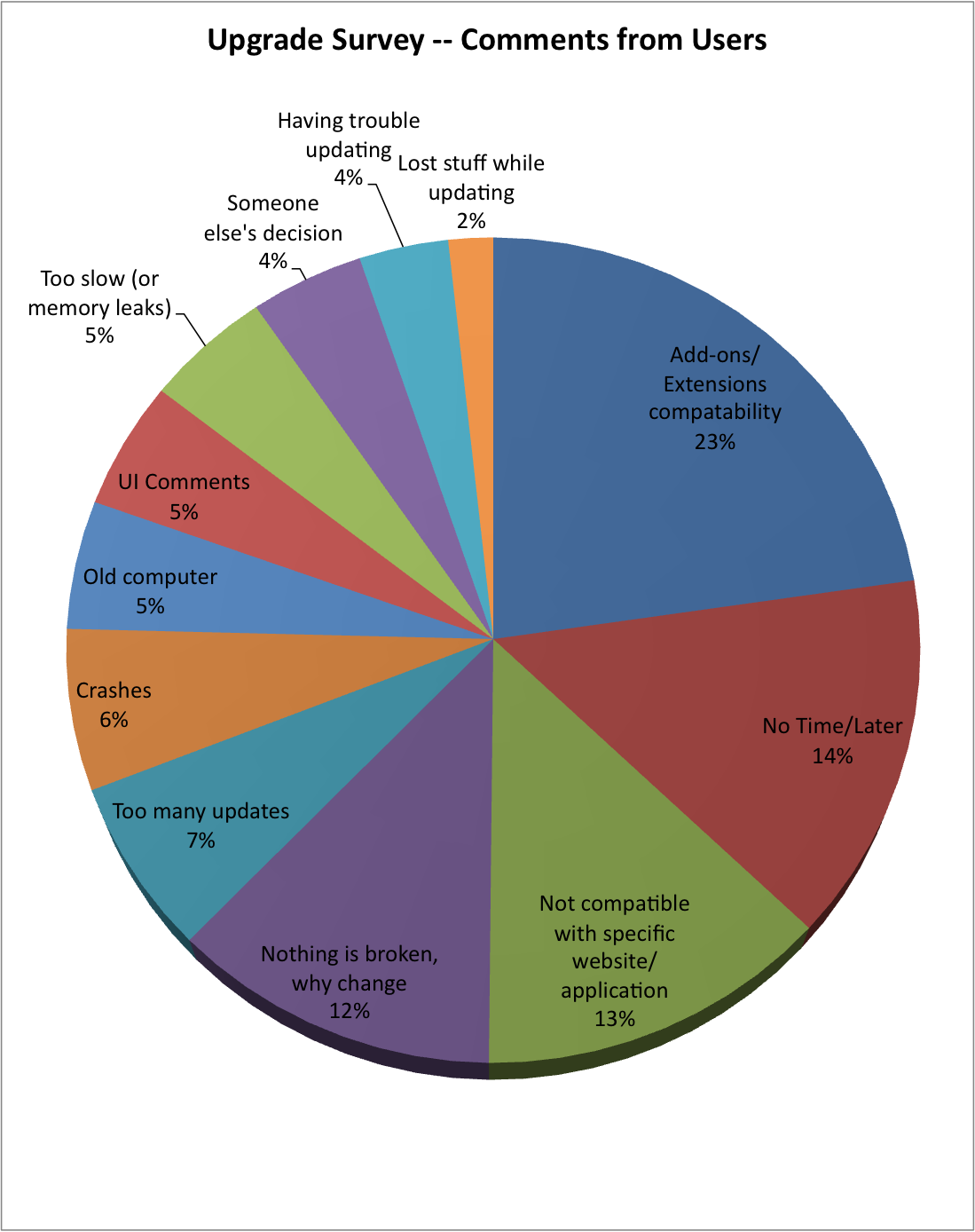 Firefox 3.6’s compatibility, both with add-ons and with specific websites/applications, remains a key issue (although user perception might be playing a small role as well). On the other hand, general stability and performance issues are cited considerably less often: crash and speed comments together account for 11% of responses, down from the 25% we saw last survey.

Our two main insights from above are also evident here. Cost comments have essentially disappeared from Question 2 as well, although they previously made up 7% of responses. And again, time concerns have become a real sticking point for users.

The rise of these “no time” responses, coupled with the still considerable “too many updates” category, has triggered suggestions that extend beyond prompt and wording revisions. For example, some propose that updates occur automatically in the background unbeknownst to the user (à la chrome), perhaps with an easy option to downgrade (unlike chrome).

Clearly, we are a long ways from making any major changes to the update process, but we’d love to hear your thoughts on any of this!