MOUNTAIN VIEW, Calif. – December 15th, 2004 – The Mozilla Foundation, a non-profit organization dedicated to preserving choice and promoting innovation on the Internet, today announced that it has placed a two-page ad in the December 16th edition of the New York Times. The ad, coordinated by Spread Firefox, features the names of the thousands of people worldwide who contributed to the Mozilla Foundation’s fundraising campaign to support last month’s highly successful launch of the open source Mozilla Firefox 1.0 web browser.

Spread Firefox is the volunteer-run Mozilla advocacy site, with over 50,000 registered members, where community marketing activities are organized to raise awareness and to promote the adoption of Firefox. The Spread Firefox site is powered by the open source CivicSpace web site software. Community members may submit ideas and join volunteer teams by visiting http://www.spreadfirefox.com.

The design and development of the New York Times ad was led by Christopher Messina, a San Francisco-based designer and a volunteer leader at Spread Firefox.

To date, Firefox has been downloaded by over 11 million people worldwide.

Getting Firefox
Mozilla Firefox 1.0 can be downloaded for free or purchased in a CD-ROM Edition with Firefox Guidebook from the Mozilla Foundation at http://www.mozilla.org. 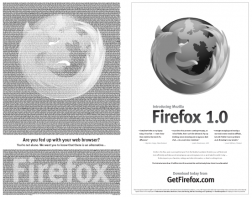