Adobe recently released a security advisory for Flash Player,  Adobe Reader and Acrobat. The advisory stated a critical vulnerability existed in all versions of Flash prior to and including 10.0.45.2.

Late last week, Adobe released an updated version of Flash that does not contain the security vulnerability; version 10.1.53.64. After considering the importance of updating our users as fast as possible Mozilla has taken the following steps: 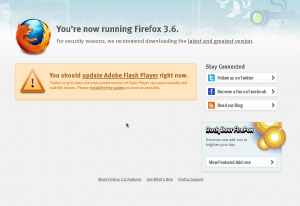 Keeping your software up to date is one of the most important things you can do to stay safe online, and Mozilla will continue to look for ways to make that process as easy as possible for our users.