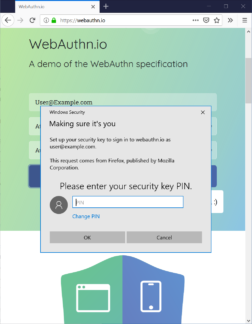 As of today, Firefox users on the Windows Insider Program’s fast ring can use any authentication mechanism supported by Windows for websites via Firefox. That includes face or fingerprint biometrics, and a wide range of external security keys via the CTAP2 protocol from FIDO2, as well as existing deployed CTAP1 FIDO U2F-style security keys. Try it out and give us feedback on your experience.

For the rest of Firefox users on Windows 10, the upcoming update this spring will enable this automatically.

Akshay Kumar from Microsoft’s Windows Security Team contributed this support to Firefox. We thank him for making this feature happen, and the Windows team for ensuring that all the Web Authentication features of Windows Hello were available to Firefox users.

For Firefox ESR users, this Windows Hello support is currently planned for ESR 60.0.7, being released mid-May.

If you want to try the Windows Hello support in Firefox 66 on Windows 10 before the April 2019 update is released, you can do so via the Windows Insider program. You’ll need to use the “fast” ring of updates.