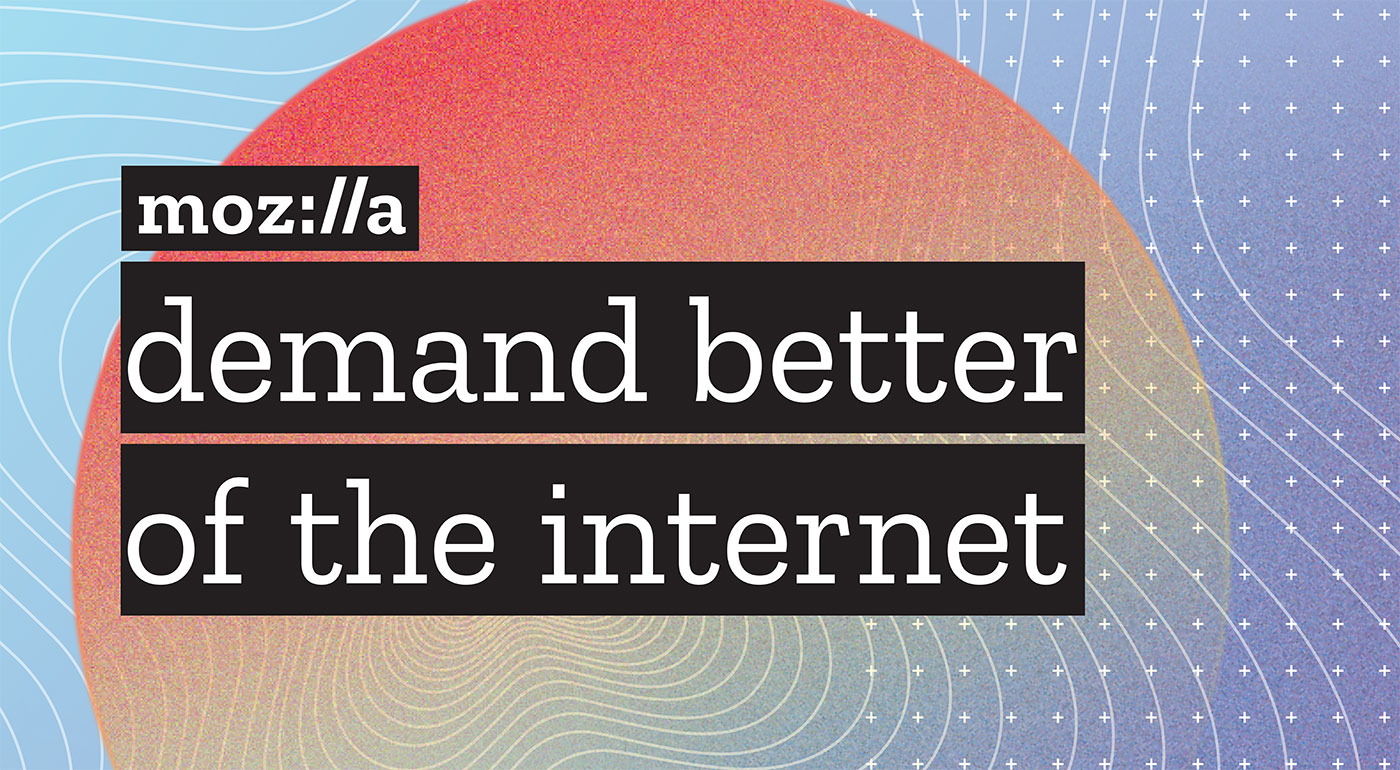 From November 25 to November 29 2019, and for the first time, Berlin will host the Internet Governance Forum (IGF) – an open discussion platform of the United Nations for legal, political, social and technical issues relating to the internet.

Mozilla will be present with a booth – themed “Demand Better Of The Internet” – all week and our international staff will explore four key areas that we at Mozilla care about:

Mozilla will also participate in the conference program and take part in the following sessions:

If you would like to meet us at IGF, feel free to stop by our booth at the IGF Village (foyer 1, booth 15) anytime and meet us for a chat. If you are interested in talking to a Mozilla spokesperson, please email press@mozilla.com.

Among others, the following Mozilians will be onsite and available to talk to: 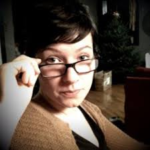 Solana Larsen is the editor of Mozilla’s Internet Health Report, which is an open source compilation of research about how the internet is evolving from year to year. Previously, she was the editor of Global Voices, an online community of writers and translators covering news and digital activism around the world. Solana is Danish-Puerto Rican based in Berlin. Topics: internet health, internet health report 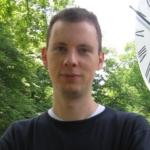 Frederik Braun defends Mozilla Firefox as a Staff Security Engineer in Berlin. Besides enhancing the browser, he has also been involved in web and mobile security. Frederik contributes to the W3C Web Application Security Working Group and co-authored the Subresource Integrity standard. He’s also taught web security at the Ruhr-University of Bochum. When not working on computer security, Frederik spends time with his family in Berlin or on long bike tours across Europe. Topics: Security and privacy, Web standards, Free and open source software 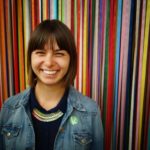 Michelle Thorne is a Senior Program Officer at Mozilla, where she leads a PhD research program to build trustworthy connected devices and IoT, together with the University of Dundee with funding from the European Commission. She also oversees Mozilla Fellows advancing policies in the EU for healthier AI. Michelle has a background in free software, free culture and the commons. Topics: Research networks for internet health, Internet of Things, AI, Free & Open Source 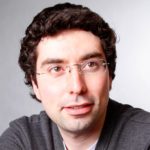 Kadir Topal is the Product Lead for MDN Web Docs where we works with his team to provide developers with the information they need to build delightful experiences on the open web. He also works with a group of browser vendors and the W3C on the annual Web Developer Needs Assessment. He’s been a long term contributor to Mozilla, having started the German Firefox community in 2002. Kadir lives in the Ruhr area in Germany. Topics: Interoperability on the Web, Free and Open Source, Developer Education 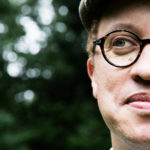 Kelly Davis studied Mathematics and Physics at MIT, then went on to graduate work in Superstring Theory/M-Theory, working with “Genius Grantees” (MacArthur Fellows) such as Daniel Friedan, Nathan Seiberg, and Stephen Shenker. He then went on to code, joining a startup that eventually went public in the late 90’s. After that he decided to move to Berlin and come on board a startup working on natural language understanding. In 2002 he joined the Max Planck Institute for Gravitational Physics where he worked on software systems used to help simulate black hole mergers. Jumping the fence again he went back to industry and worked at Mental Images/NVIDIA writing 3D rendering software. After that he worked on natural language understanding at a startup, 42, creating a system, based off of IBM’S Watson, that is able to answer general knowledge questions. Kelly joined Mozilla in 2015 where he now leads the machine learning group working on STT, TTS, NLU, and various other machine learning problems. He’s based in the Mozilla Berlin office. Topics: Machine learning, voice technology. 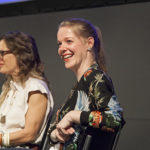 Cathleen Berger is a political scientist by training. She has built her career on combining her expertise and training with her curiosity for technological developments and communication, notably with a view to cultural differences in a globalised, networked world. She is currently heading up Mozilla’s work on Global Governance, including representing Mozilla at fora such as the G20, the United Nations, or the World Economic Forum. She is also in charge of developing policy strategy for the Office of the Chair, identifying emerging trends around technologies and their impact on society. Cathleen is based in Berlin but can often be found savouring culinary treats in various corners of the world. Topics: Global Governance, policy and decision-making processes, digital inclusion, privacy and security, emerging technologies, strategic foresight. 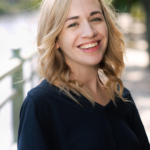 Brandi Geurkink is a campaigner at Mozilla where she leads Mozilla’s advocacy work to counter disinformation and holding technology platforms to account. Her background is in campaigning and community organising on a variety of issues like poverty relief, global democracy, tenants’ rights, money reform, and internet freedom. She has a strong interest in the adoption of new methodologies to examine the impact of emerging social movements and has conducted extensive research on the Occupy movement specifically. Topics: Mis and disinformation, platform accountability, digital rights campaigning, political ad transparency. 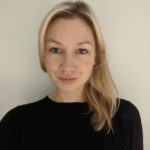 Kasia Odrozek is a long-time open web and digital rights activist, lawyer and political scientist. Kasia runs the production of Mozilla’s Internet Health Report, a compilation of research and stories explaining what’s key to a healthier internet. Before Mozilla she worked on creating open culture and developing mediawiki software with Wikipedia communities. She is also a recipient of the Google News Initiative grant with her startup TapeWrite where she led product and worked on alternative funding models for audio publishers. Topics and interests: internet health, decentralization, alternative online economy, governance and funding in tech business, privacy, open internet, open source, tech policy. 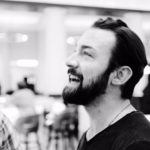 Alexander Klepel is Head of Strategic Partnerships at Mozilla’s Open Innovation team. Based in Berlin, he drives collaborations at the intersection of technology, politics and media to help scaling Mozilla’s research and development efforts. His background lies in strategic communications with 10 years of international experience in corporate, start-up and tech non-profit contexts. He holds a master’s degree in Communication Management, Politics and Psychology. And he likes Disney. Topics: Open Innovation, Emerging Tech, Strategic Partnerships & Collaborations, Open Voice Technology. 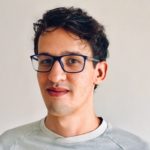 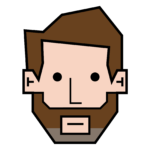 Kai Burkhardt is a member of the EU Firefox brand marketing team, that is based in Berlin. He has a PHD in history but worked rather on the future of societies ever since he left university. Topics and interests: Media Politics, regulation and infrastructure. Data collection and privacy violation. Journalism and misinformation. 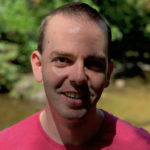 Anne van Kesteren has been a standards engineer for well over a decade and works on a variety of web standards as well as strategy around them from Mozilla’s Berlin office. Topics and interests: security, privacy, web architecture, and browser architecture. 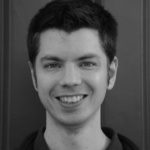 Stefan Baack is a research and data analyst for Mozilla’s Internet Health Report, a compilation of research and stories exploring ongoing developments around the internet. Parallel to Mozilla, he is an associate researcher at the Weizenbaum Institute for the Networked Society, where he is researching transnational journalism networks. His work is broadly interested in the evolution of democratic practices and visions in increasingly digitalized and globalized media environments. Topics: Internet health, (data) journalism, civic tech, data activism. 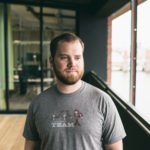 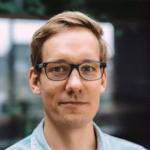 Martin Koppitz is a Global Benefits Manager at the Mozilla People Team. He is currently taking care of all benefits for European Mozilla employees. This includes managing sensitive data such as personal identifiers, compensation and health data. Making sure the technology and tools used are appropriate and secure if of high importance. Fulfilling both legislation such as GDPR as well as internal standards is a key here. Martin is also involved in methods such as agile HR work and new work. This is particularly relevant for Mozilla’s remote and distributed culture of around 47% of employees not working form one of the 10 global offices.