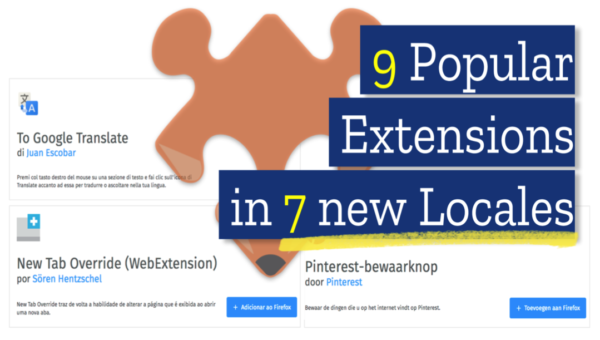 You might have noticed that while Firefox supports 90 languages, many extensions and their listings on addons.mozilla.org (AMO) are only available in English.

At present, we don’t have a way to connect extension developers with the translation community at scale, and  Pontoon, Mozilla’s tool for localizing products and websites, currently only supports translating the AMO site itself.

What we do have, however, is a desire to make translation resources available, a longstanding and active community of localizers, and friends on Mozilla’s Open Innovation team who specialize in putting the two together. Part of Open Innovation’s work is to explore new ways to connect communities of enthusiastic non-coding contributors to meaningful projects within Mozilla. Together with Rubén Martín, we ran a campaign to localize an initial group of top Firefox extensions into the 7 most popular languages of Firefox users.

More than 100 multilingual Mozillians answered the call for participation and submitted more than 140,000 translated words for these extensions using CrowdIn, a localization platform most recently used for Mozilla’s Common Voice project. These translations were reviewed by a core team of experienced localizers, who then provided approved translations to developers involved in the campaign to include in their next version update.

Now, you can enjoy this collection of extensions in Chinese (simplified), Dutch, French, German, Italian, Portuguese (Brazilian),  and Spanish:

While this campaign is limited to a small group of extensions, we hope to roll out a localization process for all interested extension developers in the near future. Stay tuned for more information!

If you would like to participate in future campaigns at Mozilla, subscribe to Mission-Mozillians-Campaigns tag on Discourse to learn how to get involved. If you are specifically interested in localizing other content for Mozilla, check out the L10n wiki to learn how to get started.

Many thanks to the extension developers and localizers who participated in this campaign.

* Coming soon! If you would like a localized version of this extension in one of the languages listed above, install the extension now. During its next update, you will be automatically switched to the version for your locale.