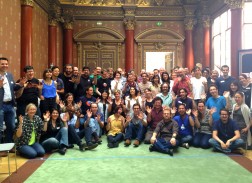 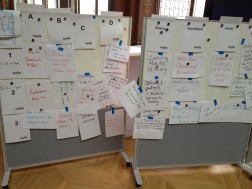 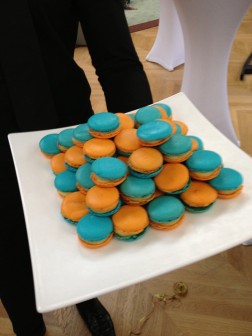 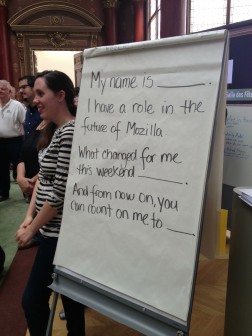 My expectations for the Summit Planning Assembly (“SPA”) were reserved.  When I have a role, even if it’s small, in the creation of something, I try hard not to “expect” (probably an exercise in self-preservation).  Nonetheless,  I entered into this rather large (70+) meet up excited by the possibility of what could happen.  The beauty of the Paris Space was distracting.  Fresh from it’s grand debut, entertaining the likes of Fleur Pellerin, the ornate, unblemished rooms, with so many of their own stories to tell I’m sure, seemed ready to get to work.

Most of the group arrived to a Friday evening reception where Mitchell (Baker) and Debbie (Cohen) set the stage for the 48 hours that would follow.  Between bites of orange and blue Mozilla-themed macaroons, our collective goal, as nominated representatives of our regions and/or functional areas within Mozilla, was to help shape the Summit as a forcing factor for alignment on the future of Mozilla.  We would deeply consider the question:

What overarching theme/topic/experience that if explored at the Summit in some manner would move us (Mozilla, the mission, the open Web) forward?

After having worked on the weekend’s agenda with our facilitators from Unconference for many weeks, the goal for the first day of the Assembly was clear to me; get to know the others in the room, discuss topics meaningful to you, listen to ideas others think are important for Mozilla’s future, and mostly, to be prepared to change your mind.

“If you leave this weekend thinking the same way you started, we have not, or you have not, been successful here.”  (Mitchell’s opening remarks)

We spent our first day in a variety of exercises intended to do that (1:1 chats expanded to 2:2 chats, two rounds of Unpanels – small, witnessed discussions – and a “World Cafe”.)  The content of these sessions was generative, provocative, chaotic, and uncomfortable.   Throughout the day it wasn’t always clear why we were doing what we were doing — talking, rather than generating, producing, making the “list” of themes, topics, experiences for the Summit.  We asked:

“When will we make the list?”  and “Where are we headed here?”

Not laying that out was hard for us.  To me, the talking felt almost indulgent and connecting it to our outcome, the stuff we flew half-way around the world to do, was not obvious.

And then Sunday came.

Almost like a breath of air, Sunday opened with Mark (Surman) and Kate giving us what we needed – yesterday was about ideation, relationship building, listening.   Today is about the “list”!  Thank goodness.

The group spent Sunday in an Open Space construct.  Based on the experience of Saturday, people we asked to host a breakout on a specific topic — that if explored at the Summit in some manner would move Mozilla forward — if they felt moved to.  Those up for it, were asked to write their session topic on a note card and to place it in one of three time slots available (picture of the board is above.)  Of course, there were more sessions proposed than space so the group went about, without prompt, grouping like topic together to make them all fit.   Mitchell came to me at that point and said:

“This is something to witness.  This is where the magic happens.”

Folks went off to lead or join sessions for the following few hours.  Mark, Debbie, Mitchell, Kate and I, went about “bucketing” the sessions (the cards on the wall) into larger themes – to be tested by the group, once they returned from the Open Space.   Each piece of paper seemed to fit into one of five big themes (a few examples in parenthesis):

We placed the five themes up on the board and when the group returned they set about sorting topic beneath them.  We offered an “other” category in the event something didn’t fit but we didn’t need it.  Here was our list, finally.  The start of our framework.

The final step was to determine leaders for each of the five themes and for the rest of us to select into one.  These groups became Summit content working groups.  They will work together to evangelize the ideas from the SPA and will help the planning committee decide the specific form-factors (sessions, keynotes, Open Space, etc.) that will best serve the topics most critical to address at the Summit.  We can all look forward to more communication on specifics over the next few weeks like how to get involved.

I’d like to close this rather long post with a quick note about the final Assembly exercise.  I hear often from Mozillians who attended the 2010 Summit, that it was magical.  I think we felt a little of that this weekend, once we got through the discomfort (or perhaps because of it).  For me, the magic was most apparent in the final hour.  Each one of us, 70 in total, was asked to stand-up and declare:

Once we were done, we each jumped over a line of blue tape symbolically sealing our promise to each other and to Mozilla.  That was magic.

Thank you to all of the delegates to attended the Assembly.  I have little doubt that the 2013 Summit will be nothing short of profound, with a whole lot of magic sprinkled in.