Editor’s Note: Today we bring you a guest post from Felipe Gomes of Brazil, a winner of the Extend Firefox 3 contest.  Felipe is a newer, but very active Mozilla contributor. We asked him to share how he came to be involved with Mozilla.  Congrats again and thanks for all of your hard work, Felipe!

Hi all!  I’m Felipe Gomes, a computer science student from Brazil. As a geek, I’ve always appreciated and believed in open-source, and have tried to get more involved since going to college.  I began using Firefox add-ons when I started with web development, and that led me to learn more about the technologies behind Firefox and its platform. I learned XUL and JavaScript by reading, practicing and trying to run random ideas and experiments in the browser.

I had been following the Mozilla project for a while, but discovered how fruitful it is to be an active member earlier this year when I joined the Brazilian community.  I discovered that there are many passionate members all over the world who love Firefox and want to promote the culture and the browser, regardless of their city or country.  I’ve had the opportunity to interact with many community members this year when I gave talks about XUL and add-ons development.

It’s been very fun and rewarding to be involved.  During the frenzy of the Firefox 3 launch, I created a Download Day Countdown add-on, helped spread the World Record in Brazil and organize our local launch party! I also had the opportunity to work on the programming side, when I did some Processing.js demos and, more recently, submitted an add-on to the Extend Firefox contest.

To be one of the contest winners was a very special moment for me, and an honor, especially because of the number of great extensions that were submitted and chosen (I’m already using many of them!). The great responses, comments and suggestions that people have been sending in the last week made me realize that when you have an idea that you believe in, you really should work on it. Turns out, other people might like it and believe in your idea as much as as you do!

I’d like to thank all the nice people I got in touch with this year in Mozilla Brazil and the greater community: Marcio, Mario, Clauber, Fernando, Andrea, Mary and Chris. And congratulations to every developer who joined the contest! Let’s keep spreading the love for Firefox! 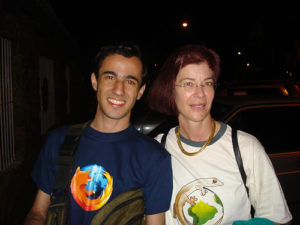