We’re extremely excited to be participating in today’s White House Science Fair—and even more excited to have President Obama help us kick off our new summer-long Maker Party: thousands of community-led events around the world to celebrate the amazing things we can make and learn thanks to the Web. 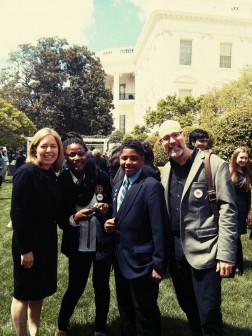 A student member of Mozilla’s Hive Learning Network project—16-year old Zainab Oni from MOUSE in NYC—was honored for her contribution to a wrist-mounted Arduino circuit, which helps visually impaired diners find their food. 15-year-old Senqué A. Little-Poole, from the Sprout Fund‘s Hive Pittsburgh chapter, was also honored, for his research on how to use anti-virus cells to cure diseases.

Mozilla’s Executive Director Mark Surman also was there, to talk about our efforts to teach technology skills and, with the help of the White House, to kick off Mozilla’s big summer-long campaign: Maker Party 2013.

This summer, from June 15 to September 15, Mozilla and the National Writing Project will host dozens of partners from around the world in a giant global Maker Party. Thousands of events will celebrate the amazing things we can make and share on the Web — from video remixes, to apps and webpages, to DIY robots.

Maker Party 2013 will be the second annual summer-long party Mozilla has thrown focused on Web education and digital literacy. Last year’s campaign, the Mozilla Summer Code Party, included more than 700 community-led events, with more than 10,000 participants across 80 countries. This year the party will be much bigger—with 40+ big-name partners currently signed-up, and more to come.

Who’s coming to the party?

Maker Party 2013 is a big tent affair. We’ll be joined by dynamic start-ups, non-profits, institutions, and tech companies, including Black Girls Code, California Academcy of Sciences, DIY.org, Girl Scouts of Greater Chicago and Northwest Indiana, Intel, NYC Department of Education, and the Sesame Workshop. Together, we’ll be engaging more than 500,000 people to learn and make things thanks to the web. A full and growing list of the organizations joining the Maker Party is available at webmaker.org/party.

“This is a global party — and you’re invited,” said Mozilla Executive Director, Mark Surman.  “Mozillians are people who make things, and we’re part of a growing global community of people who feel the same way. That’s why this year’s party isn’t just about learning to code, but celebrating the huge range of learning, making and creating the Web makes possible.”

How to get involved:

Mozilla’s Maker Party is a part of the John D. and Catherine T. MacArthur Foundation’s Summer of Connected Learning.