Today’s release of Firefox includes various features for developers and users that enable a richer and safer experience on the web.

Firefox is the first browser to support the new WebGL 2 standard, which gives developers the ability to utilize compelling 3D graphics that are available for the first time on the web. Expanding on the solid foundation of WebGL 1, WebGL 2 allows content creators to leverage more modern accelerated rendering features, like transform feedback, expanded texturing functionality, and multisampled rendering support. This will make it possible for developers to create more sophisticated and engaging visual content on the web.

The full WebGL2 feature set works on Windows, MacOS, and Linux. Developers interested in learning more about WebGL 2 can read about it on the Hacks blog.

If you’d like to try running a WebGL 2 demo, upgrade to Firefox 51, and check out the After the Flood by PlayCanvas. Here’s a quick video of the demo if you haven’t upgraded yet.

Keeping users safe online has been a key priority for Mozilla, and we’ve long been a vocal proponent for using HTTPS to secure a user’s Web experience through efforts like Let’s Encrypt. HTTPS encrypts your connection to help protect you from eavesdropping and tampering when doing everything from online banking to communicating with your friends.

Starting today in the latest Firefox, web pages that collect passwords, like an email service or bank, but have not been secured with HTTPS will be more clearly highlighted as potential threats.

Up until now, Firefox has used a green lock icon in the URL bar to indicate when a website is secure (using HTTPS) and a neutral indicator (no lock icon), otherwise. In order to more clearly highlight possible security risks, these pages will now be denoted by a grey lock icon with a red strike-through in the URL bar. 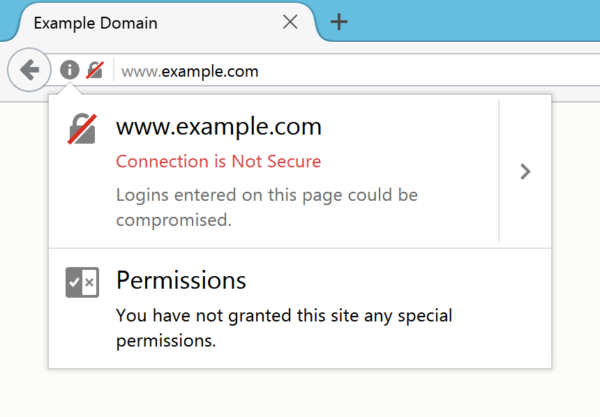 Clicking on the “i” icon, will display the text, “Connection is Not Secure” and “Logins entered on this page could be compromised”.

You can read more details about how we help users identify non-secure sites on the Mozilla Security blog.

Last year, we started the process of rolling out multi-process Firefox to desktop users. Instead of running all of Firefox in one process, Firefox now runs in two processes: one for the browser’s user interface and another for web page content. The result is a Firefox that is faster and more responsive. Today, more than half of desktop users are running Firefox in multiple processes.

There’s more for developers in the new release, too, including IndexedDB 2, a big upgrade to a powerful standard API for local storage.