Mozilla is participating in the Day of Action with a new podcast, video interviews with U.S. Senators, a special Firefox bulletin, and more

As always, Mozilla is standing up for net neutrality.

And today, we’re not alone. Hundreds of organizations — from the ACLU and GitHub to Amazon and Fight for the Future — are participating in a Day of Action, voicing loud support for net neutrality and a healthy internet.

“Mozilla is supporting the majority of Americans who believe the web belongs to individual users, without interference from ISP gatekeepers,” says Ashley Boyd, Mozilla’s VP of Advocacy. “On this Day of Action, we’re amplifying what millions of Americans have been saying for years: Net neutrality is crucial to a free, open internet.”

“We are fighting to protect net neutrality, again, because it’s crucial to the future of the internet,” says Denelle Dixon, Mozilla Chief Legal and Business Officer. “Net neutrality prohibits ISPs from engaging in prioritization, blocking or throttling of content and services online. As a result, net neutrality serves to enable free speech, competition, innovation and user choice online.”

The Day of Action is a response to FCC Commissioner Ajit Pai’s proposal to repeal net neutrality protections enacted in 2015. The FCC voted to move forward with Pai’s proposal in May; we’re currently in the public comment phase. You can read more about the process here.

Here’s how Mozilla is participating in the Day of Action — and how you can get involved, too:

Nine hours of public comments. Over the past few months, Mozilla has collected more than 60,000 comments from Americans in defense of net neutrality.

“The internet should be open for all and not given over to big business,” wrote one commenter. “Net neutrality protects small businesses and innovators who are just getting started,” penned another.

We’ll share all 60,000 comments with the FCC. But first, we’re reading a portion of them aloud in a nine-hour, net neutrality-themed spoken-word marathon.

And we’re showcasing the comments on Firefox, to inspire more Americans to stand up for net neutrality. When Firefox users open a new window today, a different message in support of net neutrality will appear in the “snippet,” the bulletin above and beneath the search bar. 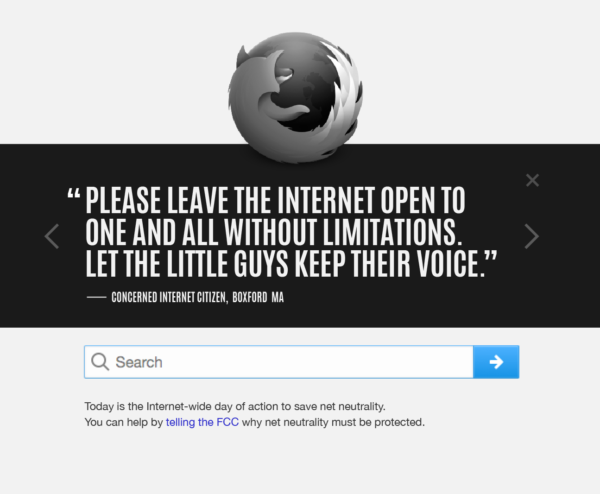 It’s not too late to submit your own comment. Visit mzl.la/savetheinternet to add your voice.

A word from Senators Franken and Wyden. Senator Al Franken (D-Minnesota) and Senator Ron Wyden (D-Oregon) are two of the Senate’s leading voices for net neutrality. Mozilla spoke with both about net neutrality’s connection to free speech, competition, and innovation. Here’s what they had to say:

Stay tuned for more interviews with Congress members about the importance of net neutrality.

Comments for the FCC. Mozilla’s Public Policy team is finishing up comments to the FCC on the importance of enforceable net neutrality to ensure that voices are free to be heard. They will speak to how net neutrality fundamentally enables free speech, online competition and innovation, and user choice. Like our comments from 2010 and 2014, we will defend all users’ ability to create and consume online, and will defend the vitality of the internet. User rights should not be used in a political play.

Net neutrality podcast. We just released the second episode of Mozilla’s original podcast, IRL, which focuses on who wins — and who loses — if net neutrality is repealed. Listen to host Veronica Belmont explore the issue in depth with a roster of guests holding different viewpoints, from Patrick Pittaluga of Grubbly Farms (a maggot farming business in Georgia), to Jessica González of Free Press, to Dr. Roslyn Layton of the American Enterprise Institute. 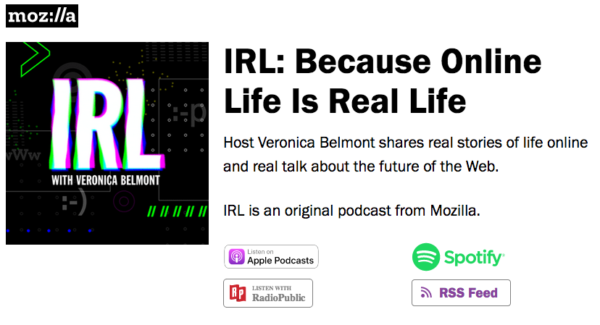 Today, we’re amplifying the voices of millions of Americans. And we need your help: Visit mzl.la/savetheinternet to join the movement. The future of net neutrality — and the very health of the internet — depends on it.

Note: This blog was updated on July 12 at 2:30 p.m. ET to reflect the most recent number of public comments collected.