Today, Mozilla.org is blacked out to support net neutrality.

We’re joining with others across the web — from Github and Reddit to Etsy and Imgur — for a Break the Internet Day of Action. The idea: to show how broadly we all value an open internet. And to ask Americans to call their members of Congress and urge them to stop the FCC’s plan to end net neutrality. 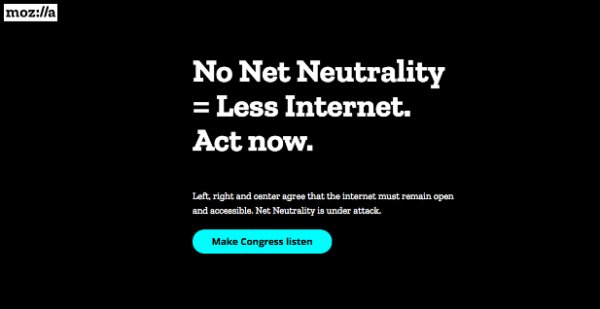 In two days, the FCC will vote on a order that would gut current net neutrality protections, allowing internet service providers (ISPs) to create fast lanes and slow lanes online. ISPs like Verizon and AT&T would be able to block, throttle, and prioritize internet access for all Americans.

Says Ashley Boyd, Mozilla’s VP of Advocacy: “Right now, ISPs can’t discriminate between the different websites where Americans shop, socialize, and read the news. But without net neutrality, Americans’ favorite online services, marketplaces, or news websites could load far slower — or not at all.”

Says Denelle Dixon, Mozilla’s Chief Business and Legal Officer: “Net neutrality is about free speech, competition, and innovation. If the FCC votes to roll back net neutrality, the decision would harm every day internet users and small businesses — and end the internet as we know it.”

Net neutrality is something we can all agree on: our recent public opinion poll shows overwhelming support — across party lines — for net neutrality, with over three quarters of Americans (76%) supporting net neutrality.

Mozilla is a nonprofit committed to net neutrality and a healthy internet for all. If you are seeking additional ways to help, a donation to Mozilla allows us to continue our work.