Today we’ve updated the Army of Awesome page with some changes to better recognize our awesome contributors. We’ve made it easier for you to choose which tweets to respond to and also added a stats section that features our top tweeters. Check out the biggest changes below and then take a few moments to help some Firefox users. 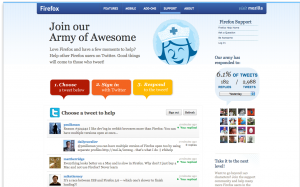 This week's update focuses on usability and recognizing top tweeters

Each tweet on the page now shows how many replies it has received. This has by far been our top request, since contributors want to responded to tweets that don’t have replies yet. We’ve also used this text area to recognize contributors for being first to respond. Once a tweet receives a reply, the username of the first person to reply is shown on the right side.

As you respond to several tweets at once, you want to keep track of which tweets you’ve replied to and the page now shows you that too. Once you reply to a tweet, the tweet will say “You replied” underneath the timestamp. You can also view replies by clicking on the reply text on the right. [Small caveat: You won’t be able to view your own replies until you click on the Refresh button above the list of tweets. This extra step will be removed in a future update.] 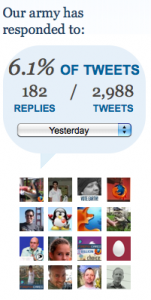 We’re now displaying some high-level statistics about how many tweets we’re responding to as a group. You can see how we’re doing for various time periods — Yesterday, Last Week, Last Month, and Overall (since October).

The page also shows who the top tweeters for each time period are. You’ll see the top 16 contributors and if you hover your cursor over their profile image, you’ll see how many tweets they’ve responded to during that time period.

We’re just starting to plan the next release for Army of Awesome, and we’d love your input. Integration with SUMO accounts and localizing the page and signpost messages seem like natural steps. What else would you like to see? Leave a comment with your ideas or add them to the ideas section of the Roadmap.

Finally, I want to give a huge thanks to our SUMO and WebDev teams for making this update happen!