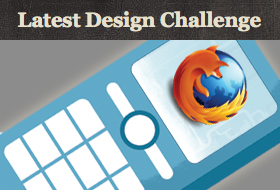 We just launched a big new feature on the Mozilla Creative Collective: design challenges. The idea is to give our creative community the opportunity to make meaningful contributions to Mozilla by focusing everyone’s efforts on a particular topic. We’ll be hosting these design challenges roughly once a month, and we’re kicking things off with Firefox Goes Mobile.

The goal of the Firefox Goes Mobile challenge is to create the official promotional emblem of the mobile version of Firefox (which is getting closer and closer to release). The winning image will be used on everything from websites like mozilla.com and addons.mozilla.org to schwag like t-shirts and stickers, so if you’re a designer it’s a great way to get involved and make a big impact on a really important project.

To sum up, we’re asking you to abstractly represent mobile-themed concepts like convenience, connectivity and innovation in a simple, yet easily understandable graphic…basically telling the mobile story with a single image. Not an easy task, but of course that’s why it’s called a challenge! There are more details about what we’re looking for on the Firefox Goes Mobile page, so if you’re thinking about getting involved definitely read through those first.

The submission period lasts until September 30th (with voting extended through October 7th)…we can’t wait to see what the Mozilla community comes up with!