Today is a big day for Mozilla and web video. Popcorn, Mozilla’s new HTML5 media toolkit, just launched version 1.0. Coinciding with the launch is the world premiere of the National Film Board of Canada’s “One Millionth Tower” project, a unique Popcorn-powered web documentary, which makes its world premiere this weekend at the Mozilla Festival in London and online at Wired.com.
Popcorn allows web filmmakers to amp up interactivity around their movies, harnessing the web to expand their creations in new ways. Popcorn uses Javascript to link real-time social media, news feeds, data visualizations, and other context directly to online video, pulling the web into the action in real time. The result is a new form of  cinema that works more like the web itself: interactive, social,  and rich with real-time context and possibilities that continue to evolve long after filming wraps.

Director Kat Cizek used Popcorn and other HTML5 tools like WebGL to create One Millionth Tower, the latest installment in the NFB’s Emmy award-winning Highrise series. One Millionth Tower brings residents from a dilapidated Toronto apartment complex together with architects and designers, imagining how they can revitalize their homes and neighborhood together. The film then uses the magic of animators, web developers and Popcorn to bring these ideas to life, all through a multi-layered, three-dimensional landscape that runs directly in the web browser. 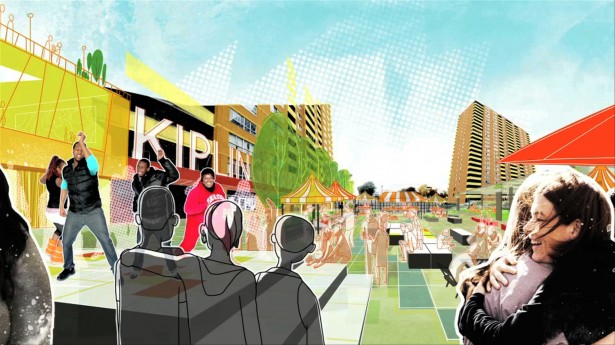 Popcorn made it possible for the filmmakers to control a 3D environment in WebGL, and then augment it with real time information pulled from  Wikipedia, Yahoo’s Weather API, Flickr and Google Maps. The result is a  unique viewing experience customized in the browser for each viewer. When it’s snowing in Toronto, for example, it starts snowing in the virtual  world of One Millionth Tower.
Popcorn has broader applications as well. Semantic video  pioneer RAMP is using Popcorn to augment The People’s Choice Awards. PBS  Newshour used Popcorn to annotate President Obama’s 2011 State of The  Union Address. The French and German broadcaster Arte has used it to augment current affairs programming.

Coders, film-makers and journalists are exploring its potential in hackfests and learning labs at this weekend’s Mozilla Festival. Take a guided tour or get more involved at http://mozillapopcorn.org/.