Knight-Mozilla OpenNews is looking for five developers and technologists to spend a year writing code in collaboration with reporters, designers, and developers in some of the best newsrooms in the world.

This is the third year of the OpenNews program, a collaboration between the Knight Foundation and Mozilla. Fellows spend 10 months focusing on writing code and solving problems in journalism while being embedded in a newsroom, afforded the chance to hack, present, and attend events around the world. 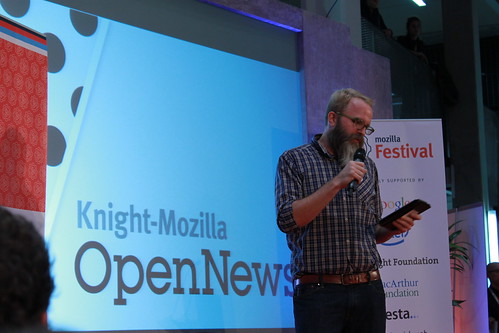 The 2014 news partners include:

Working in the open

Open collaboration is a big part of the Fellowships — both inside the newsroom, with other past and present fellows, and with the rapidly growing community of journalist-coders. Code and prototypes are openly shared through OpenNews Source, and educational resources and case studies are also freely available through OpenNews Learning.

“This is an exciting moment in journalism, and you can be right at the center of it.” —Dan Sinker, Mozilla’s Director of OpenNews