We created Firefox to give people choice and control of their Web experience and we’re always adding more ways to personalize your Firefox. Firefox is made by a non-profit organization and a global community dedicated to Mozilla’s mission of promoting openness, innovation and opportunity online.

One way we offer more choice and control is Firefox Accounts, which provides a personalized Web experience by connecting users to services like Firefox Sync and Firefox Hello. You can use Firefox Sync to access data including passwords, bookmarks, history and open tabs across your desktop and Android devices as well as Firefox for iOS (coming later this year). Firefox Accounts is also a great way to save your Firefox Hello contacts.

Today, we’re adding a new feature to Firefox Hello and a new integration with Pocket, the popular save-for-later service. Pocket started as a popular Firefox Add-on and is now a service in Firefox Accounts that helps you save all the articles, videos and websites that you want to read or watch later, all in one place. Pocket is available in Firefox Accounts in U.S. English, German, Japanese, Russian and European Spanish while we continue to add support for more languages and features. 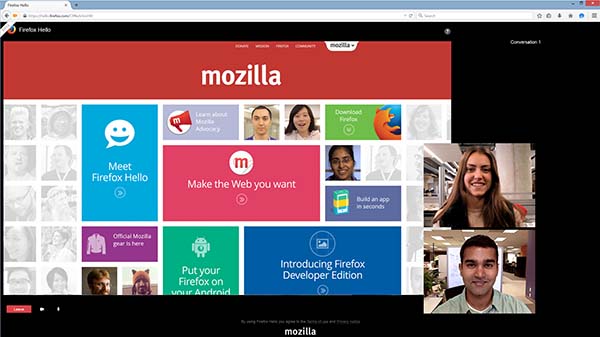 We’ve been developing Firefox Hello with our long-term partner Telefónica and we’re excited to share that Firefox Hello now offers screen sharing. This new feature allows the host to share a browser tab or application window while in the video conversation. You can share any website or window that you’re viewing while talking to friends, family and co-workers. It’s a great way to shop online together, collaborate on a document or just watch a cat video with a friend.

We’re also excited to share an update to Firefox Developer Edition, the only browser created for developers. This fresh release has new performance tools to make it easier to build fast, interactive websites and Web apps. You can read the blog post from Dave Camp and the Developer Tools team here and play Power Surge, a little game we created to help developers find slow JavaScript code in the game, and their own websites and Web apps. 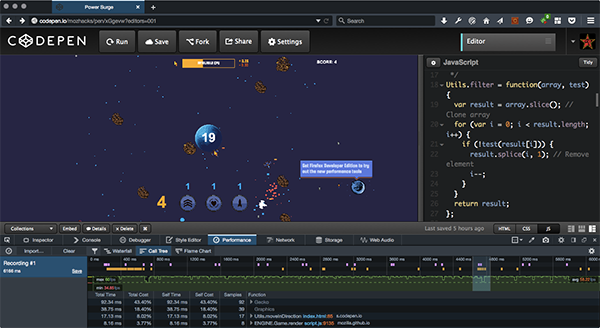