One of the things that first drew me to Mozilla was this sentence from our manifesto:

“The Internet is a global public resource that must remain open and accessible to all.”

These words made me stop and think. As they sunk in, they made me commit.

When we say, “Protect the Internet,” we are not talking about boosting Wi-fi so people can play “Candy Crush” on the subway. That’s just bottled water, and it will very likely exist with or without us. At Mozilla, we are talking about “the Internet” as a vast and healthy ocean.

We believe the health of the Internet is an important issue that has a huge impact on our society. An open Internet—one with no blocking, throttling, or paid prioritization—allows individuals to build and develop whatever they can dream up, without a huge amount of money or asking permission. It’s a safe place where people can learn, play and unlock new opportunities. These things are possible because the Internet is an open public resource that belongs to all of us.

Making the Internet a Mainstream Issue

Consider the parallels with the environmental movement for a moment. In the 1950s, only a few outdoor enthusiasts and scientists were talking about the fragility of the environment. Most people took clean air and clean water for granted. Today, most of know we should recycle and turn out the lights. Our governments monitor and regulate polluters. And companies provide us with a myriad of green product offerings—from organic food to electric cars.

But this change didn’t happen on its own. It took decades of hard work by environmental activists before governments, companies and the general public took the health of the environment seriously as an issue. This hard work paid off. It made the environment a mainstream issue and got us all looking for ways to keep it healthy.

When in comes to the health of the Internet, it’s like we’re back in the 1950s. A number of us have been talking about the Internet’s fragile state for decades—Mozilla, the EFF, Snowden, Access, the ACLU, and many more. All of us can tell a clear story of why the open Internet matters and what the threats are. Yet we are a long way from making the Internet’s health a mainstream concern.

We think we need to change this, so much so that it’s now one of Mozilla’s explicit goals.

The World Bank’s recently released “2016 World Development Report” shows that we’re making steps in the right direction. Past editions have focused on major issues like  “jobs.” This year the report focuses directly on “digital dividends” and the open Internet.

According to the report, the benefits of the Internet, like inclusion, efficiency, and innovation, are unequally spread. They could remain so if we don’t make the Internet “accessible, affordable, and open and safe.” Making the Internet accessible and affordable is urgent. However,

“More difficult is keeping the internet open and safe. Content filtering and censorship impose economic costs and, as with concerns over online privacy and cybercrime, reduce the socially beneficial use of technologies. Must users trade privacy for greater convenience online? When are content restrictions justified, and what should be considered free speech online? How can personal information be kept private, while also mobilizing aggregate data for the common good? And which governance model for the global internet best ensures open and safe access for all? There are no  simple answers, but the questions deserve a vigorous global debate.”

We need this vigorous debate. A debate like this can help make the open Internet an issue that is taken seriously. It can shape the issue. It can put it on the radar of governments, corporate leaders and the media. A debate like this is essential. Mozilla plans to participate and fuel this debate.

Of course, we believe the conversation needs to be much broader than just those who read the “World Development Report.” If we want the open Internet to become a mainstream issue, we need to involve everyone who uses it.

We have a number of plans in the works to do exactly this. They include collaboration with the likes of the World Bank, as well as our allies in the open Internet movement. They also include a number of experiments in a.) simplifying the “Internet as a public resource” message and b.) seeing how it impacts the debate.

Our first experiment is an advertising campaign that places the Internet in a category with other human needs people already recognize: Food. Water. Shelter. Internet. Most people don’t think about the Internet this way. We want to see what happens when we invite them to do so.

The outdoor campaign launches this week in San Francisco, Washington and New York. We’re also running variations of the message through our social platforms. We’ll monitor reactions to see what it sparks. And we will invite conversation in our Mozilla social channels (Facebook & Twitter). 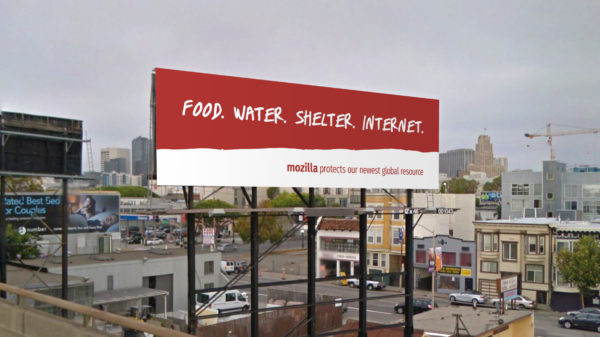 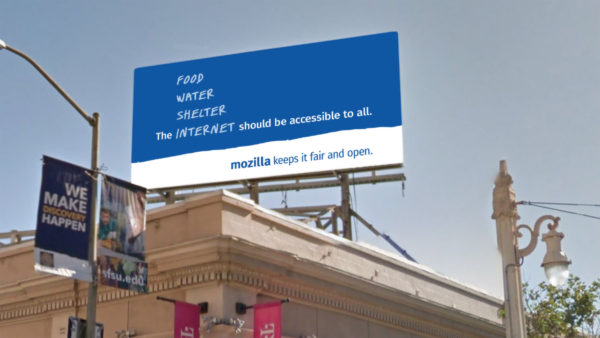 Of course, billboards don’t make a movement. That’s not our thinking at all. But we do think experiments and debates matter. Our messages may hit the mark with people and resonate, or it may tick them off. But our goal is to start a conversation about the health of the Internet and the idea that it’s a global resource that needs protecting.

Importantly, this is one experiment among many.

We’re working to bolster the open Internet movement and take it mainstream. We’re building easy encryption technology with the EFF (Let’s Encrypt). We’re trying to make online conversation more inclusive and open with The New York Times and The Washington Post (Coral Project). And we’re placing fellows and working on open Internet campaigns with organizations like the ACLU, Amnesty International, and Freedom of the Press Foundation (Open Web Fellows Program). The idea is to push the debate on many fronts.

About the billboards, we want to know what you think:

I’m hoping it does, but I’m also ready to learn from whatever the results may tell us. Like any important issue, keeping the Internet healthy and open won’t happen by itself. And waiting for it to happen by itself is not an option.

We need a movement to make it happen. We need you.