Today marks the launch of Mozilla’s first full edition of the Internet Health Report, an open source effort to explore the state of human life on the internet.

As we put our final touches on the report, the United States scrambled to prepare for testimony by Facebook’s Mark Zuckerberg, following revelations about user data obtained by Cambridge Analytica. The conversation: what should the Senate and Congress ask him?

The list of questions is long. What do we do about the data of up to 87 million people floating around, unrecoverable? Can artificial intelligence help address suspicious behaviour around elections? What are Facebook’s responsibilities to users and the public? Unsurprisingly, it was also quite scattered. We do not yet have a collective mental map of how issues like these connect.

Creating such a map is a key goal of the Internet Health Report, in which people from across Mozilla’s extended community compile research and analysis about the internet.

There were moments when weaving together this year’s report felt just as scattered. We’re all mapping new territory, and we each only have part of the map.

As an example: we spent weeks wrestling over which angle to focus on in the report’s spotlight story on ‘fake news’ and misinformation. We went back and forth on which aspects of this complex topic we each thought was most important. And then, there was an “Aha!” moment: all of the issues we’d each been championing needed to be pieced together into a bigger story.

I sketched out a list on a napkin to help order our thoughts:

What the napkin said: 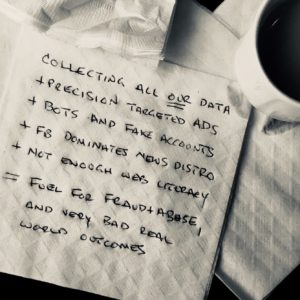 Collecting all our data

= fuel for fraud and abuse,

As with the rest of the report, the back and forth process produced a solid piece: a piece that connected misinformation into the big picture of the technology and economics that underpin the internet.

This process also served as a reminder that the internet is a complex social, business and technical ecosystem: a living system made up of computers and data and humans. Grappling with things like the Cambridge Analytica scandal requires stepping back and looking at this whole ecosystem. The Internet Health Report is designed to help us do exactly this.

The report is also designed to inspire. It includes interviews with: volunteer cybersecurity first responders; activists building open-source, civic-minded bots; and engineers creating a truly multilingual internet. While the loudest news media headlines may be bad, there is a great deal of good news happening off most people’s radar. This is where we find hope and aspiration.

This sense of hope and aspiration is common across the broader movement that Mozilla is a part of. The open source movement. The internet freedom movement. The digital rights movement. Whatever you call it, there is a growing force that stands for the idea that we can build a digital world that is open, accessible and welcoming to all.

It is people from across this movement that compiled the Internet Health Report: smart and dedicated researchers, engineers, data scientists, policy analysts, even artists. Together, we had tough, collaborative conversations. We simplified complex ideas. We connected the dots. And, we started to map the problems, opportunities and conundrums of human life online.

Of course, creating a map like this is not just something you publish and then it’s done. Just like the internet, it is something that we can only build together, over time. Which is why we encourage you to join us. The internet is an ecosystem that humans build. It’s people who decide what it is and isn’t. It’s up to all of us to envision – and create – something healthy and humane.