Mozilla is continuing to fight for net neutrality — in the courts, alongside Americans, on Twitter and, today, by joining the Red Alert protest.

The Red Alert protest raises awareness about net neutrality’s importance, and the means for keeping it intact: In mid-May, the Senate will vote on a Congressional Review Act (CRA) resolution to overturn the FCC’s net neutrality repeal. We’re partnering with organizations like Consumer Reports, the Electronic Frontier Foundation, and Reddit to encourage Americans to call Congress in support of net neutrality.

“Policymakers need to listen to their constituents: The majority of Americans are in favor of strong net neutrality rules. Mozilla’s latest public opinion poll reveals that outside of Washington, D.C., net neutrality isn’t a partisan issue. 91% of Americans believe consumers should be able to freely and quickly access their preferred content on the internet.”

“We are proud to be a leader in the fight for net neutrality both through our legal challenge in Mozilla v. FCC and through our deep work in education and advocacy for an open, equal, accessible internet. Today, Mozilla joins many other companies and civil society organizations to take another stand for net neutrality, as we try to protect against erosion into a discriminatory internet, with ultimately a far worse experience for any users and businesses who don’t pay more for special treatment.”

“Mozilla will always fight for net neutrality because it is fundamental for free speech, competition, and innovation online. Net neutrality is a core characteristic of the internet as we know it, and crucial for the economy and everyday lives. It is imperative that all internet traffic be treated equally, without discrimination against content or type of traffic — that’s how the internet was built and what has made it one of the greatest inventions of all time.”

To get involved: Call your members of Congress and express your support for net neutrality.

See the full results from our poll here. 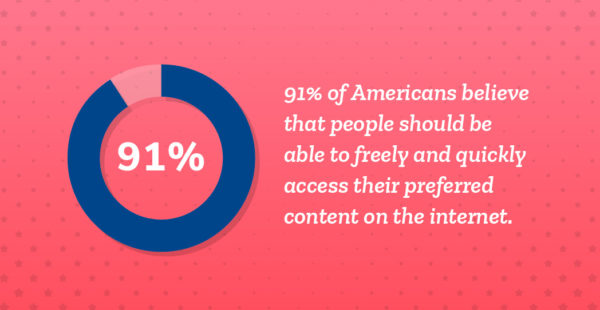