Facebook has been in the news a lot lately. It started with the announcement that over 87 million Facebook users had their personal information shared with the private firm Cambridge Analytica without their knowledge. Since then, Facebook CEO Mark Zuckerberg has testified twice in front of the US Congress and people all around the world have been talking about Facebook’s data practices. We took this opportunity to survey people on how they felt about Facebook these days. 47,000 people responded to our survey. The data is interesting and open for your exploration.

The top takeaways? Most people (76%) say they are very concerned about the safety of their personal information online. Yet few people (24%) reported making changes to their Facebook accounts following the recent news of privacy concerns around Facebook. The majority of people who responded to our survey (65%) see themselves — rather than companies or the government — as being most responsible for protecting their personal information online. And very few people (only 12%) said they would consider paying for Facebook, even a version of Facebook that doesn’t make money by collecting and selling personal data. 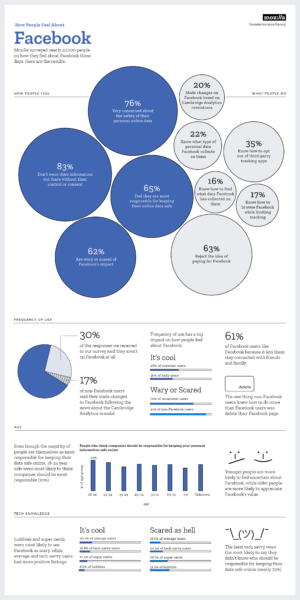 Mozilla believes in making our survey data open and accessible to everyone safely and respectfully, without sharing any personally identifying information. If you would like to go deeper into this survey data, we built this awesome interactive tool for you. Enjoy!

Methodology:
This was not a scientific poll. This was a self-selecting survey targeted mostly at people on the Mozilla Foundation email list, the Pocket newsletter email list, through the Mozilla Twitter channel, through a Medium blog post, and through users sharing with friends and family.

Mozilla makes this data available under a CC BY 4.0 license.

Enjoy this open data? Care about things like privacy, data, the Internet being awesome. Sign up here and we at Mozilla will keep you updated with the latest news and useful information.