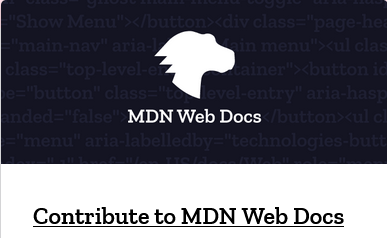 In the middle of November last year, we launched the “Month of MDN”.

… Ok, it lasted a bit more than a month, but the “Month and a bit of MDN” does not sound that good.

This was part of an effort to introduce our local communities to meaningful contributions to different Mozilla products and projects with the support of the Reps. We want to continue on this path (incorporating all that we have learned!), so wait for a new “Month of …” to come soon.

With the collaboration of the MDN team and our wonderful Reps, we focused on:

So…how did it go?

As part of “spreading the word” we collaborated with the MDN team and contributors to create this amazing video, and this great Hacks Blog article! We invite you to check out both (if you did not do so already).

Our communities and contributors were also very active in spreading the word about MDN contributions to a wider audience  (we had more than 30 tweets and around 100 re-tweet).

We created an MDN activity in the Community Portal, and during the Month (and a bit) of MDN, various communities carried out 5 events with more than 50 participants.

We would like to talk a bit more about 3 amazing communities that carried out events during the month of MDN.

The first is MozNeurons. This community focuses on helping students of the Sardar Vallabhbhai Patel Institute of Technology learn about Mozilla and Open Source.

MozNeurons organized an event introducing the students to MDN and explaining how to contribute. The meeting had to be carried out online, but the group made sure that the contributors had the best experiences possible. In fact, they are all looking forward to the next campaign!

The second is Mozilla Philippines. Robert Reyes and the community organized 2 on-line events around the Month of MDN.

There were various community members that had previously contributed to MDN, so the community took the chance to use the month of MDN as a way to drive the interest of new contributors and re-engage previous volunteers.

The first events aimed to give attendees a general overview of what MDN is and why contributing to the platform is an awesome thing to do. This was followed by a second event: the MDN Web Docs Bug Hunting session. To add fun and excitement, the community promised to give away locally printed Firefox t-shirts to those whose filed bugs were verified and closed ( 7 bugs were filed!) 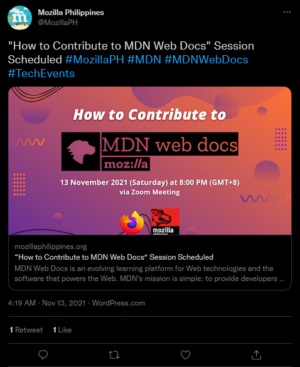 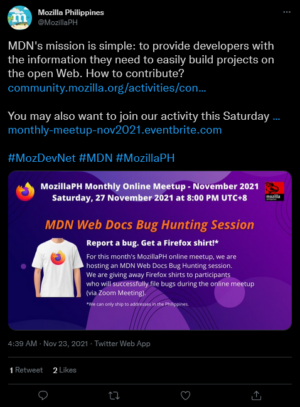 Mozilla Mexico also carried out two events! One introduced contributors to supporting beginners in MDN, and the other explained how to fix MDN issues 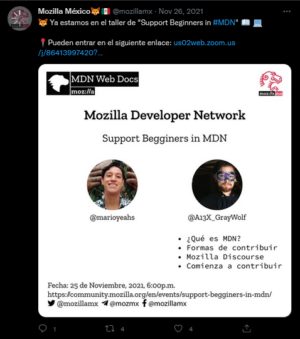 But that was not the only thing that the Mexican community, and other Spanish-speaking communities, got up to.

With a renewed interest in MDN, they got in touch with the MDN team, and managed to unfreeze the MDN Spanish locale!

Conclusions and Special thanks!

All in all, we think this was a great campaign, so thanks to all that participated!

Of course, these were just the first steps, and we encourage communities to keep organizing MDN events, and introducing more and more people to the wonderful world of MDN

Special thanks to the wonderful contributors that added subtitles in 7 languages to the video, to the Indonesian and Taiwan community for helping us test the new activity, and to all communities and contributors that tweeted about the Campaign

See you soon for the next campaign!