We’re excited to announce the launch of the second annual Firefox Challenge, a competition to raise awareness and funds for charitable causes. 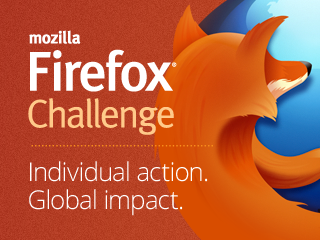 Mozilla builds products, like Firefox, that put users in control of their online experience and shape the future of the Web — not for profit, but for good. As part of our commitment to making a difference, this holiday season we’re hoping to get everyone in on the spirit of doing good. So, just like we do with Firefox, let’s turn individual action into global impact together.

Last year, we brought together a dozen cause-minded celebrities and thousands of individuals from around the world. This year, we’re turning up the volume. The Firefox Challenge will run longer, we’ll have more weekly prizes, and there will be a total of $100,000 in grand prizes for first, second, and third place to the causes of the fundraisers that raise the most between now through January 10, 2013. All together, Mozilla will donate a total of $200,000 to charitable organizations during the Firefox Challenge.

Each celebrity team is giving away great prizes too. You could win a limited edition Shepard Fairey Haiti poster signed by Olivia Wilde and Fairey, a ukulele signed by Seth Rogen, Paul Rudd and other celebrities, two tickets to the premiere of Jason Bateman’s new movie Identity Thief, an iChat and signed iPad mini from Edward Norton, and more.

The initial fundraising teams are being lead by:

Starting today, anyone can take part in the Firefox Challenge by donating to a celebrity’s fundraising efforts; joining a celebrity’s team to fundraise alongside them; or by starting a fundraiser for their own favorite cause.

Full details of the Firefox Challenge and how to participate can be found on the site at: http://www.crowdrise.com/firefoxchallenge

Join us and let’s show the world that individual action can have global impact.