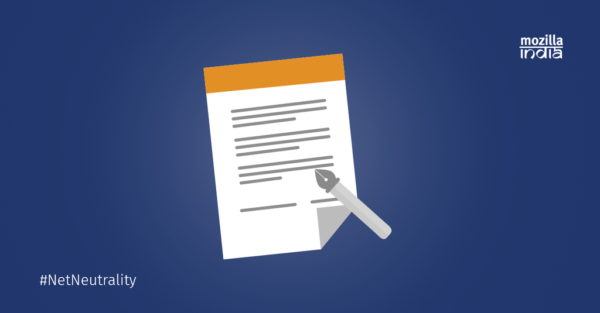 Millions of people in developing nations think that Facebook is the Internet. This is not a matter of mere confusion. It means that millions of people aren’t able to take advantage of all the things that the open, neutral Internet has to offer.

We’re committed to advancing net neutrality on a global scale. People around the world deserve access to the open Web: a Web ripe for exploration, education, and innovation. It’s especially critical to protect this right in countries where people are going online for the first time.

Mozilla’s entire community of open Web supporters is a demonstration of this commitment. Over one million Indians have mobilized through social media campaigns and on-the-ground efforts to “Save the Internet” and petition the Telecom Regulatory of India (TRAI). Indian Mozillians took a bold stand for net neutrality, because they care about freedom, choice, and innovation.

This week, Mozilla filed comments with TRAI. We’ve been engaged before with TRAI and the government of India on net neutrality, free data, and differential pricing. This time, we’re commenting on a pre-consultation paper on net neutrality. We are also contributing feedback on the Free Data consultation paper. This document asks for possible options that respect net neutrality while providing free data to users and complying with the Differential Pricing Regulation.

Our comments stress the need for a strong regulatory framework in India that ensures all internet traffic is treated equally, whether you’re a billion dollar company or a small startup. We also encourage the development of data-offering models that follow net neutrality principles:

We also articulate principles that define characteristics of equal-rating compliant models. We believe these principles will help TRAI and other regulators assess subsidized data offerings. Equal-rating means that offerings:

Join us in this effort by engaging on social media with #SaveTheInternet. Stay tuned to this blog for more on these issues. Share your opinion with the TRAI. There’s still time!