Optimizing the Interface is Hard

Creating the perfect Firefox interface is a challenging problem. Every user has their own set of common tasks. The challenge is in defining a common “default” interface that maximizes task success for the most people, on the most tasks. Using designer insight alone, it’s not always easy to know the impact of each design element!

Genetic Algorithms are well-suited to suggesting novel solutions to complex optimization problems.  If one can define the right optimization (fitness) function, GA can calculate the impact of including and placing elements. Using data recorded from Test Pilot Heatmap studies, we have defined a set of “Web Activities” that describe what users actually do using Firefox. These included “search”, “surfing the net”, and “content creation”.

We divided the visible interface space into 14,000 “cells”. Each of the 100 possible interface elements were given starting positions, and allowed to grow randomly until all cells were used. We then simulated a set of common user tasks using each random interface, proportional to how often those tasks occurred in the recorded Test Pilot data set. An interface “did well” if the user didn’t have to move the mouse much to complete the task. Top performing interfaces were kept and allowed to “mutate”, by allowing UI elements to “grow” or “shrink”.  When interface elements got “too small”, they were placed behind the “more options” element, and assigned a higher cost to access.

Within 700 generations, good candidates started emerging, and by generation 1100, convergence was achieved. We then chose the most visually appealing one as our candidate.   GA led to some ragged edges, so did some visual cleanup to squarify elements.  This “cleaned” candidate preformed with 98.1% of the effectiveness of the original.  The result, which we are calling Firefox Next, appears below. Bubbles describe the salient features. In particular, note: 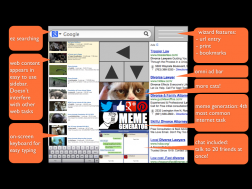