This report is aiming to capture and explain what has happened during and after the launch of Firefox 50 on multiple support fronts: Knowledge Base and localization, 1:1 social and forum support, trending issues and reported bugs, as well as to celebrate and recognize the tremendous work the SUMO community is putting in to make sure our users experience a happy release. We have lots of ways to contribute, from Support to Social to PR, the ways you can help shape our communications program and tell the world about Mozilla are endless. For more information: [https://goo.gl/NwxLJF]

Thank yous from users that received help from the SUMO community: 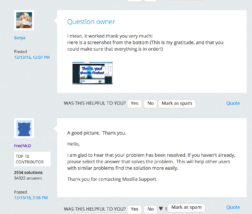 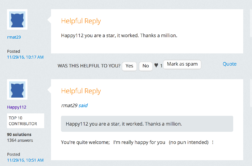 Knowledge Base and Localization

More info in this document

What we are really good at troubleshooting: Addon compatibility, Customization, Start up Crashes

Firefox for Desktop by Google Analytics

Firefox Klar and Firefox Focus had no issues upon the first first week release.

See more Data on the threads this Release here

Brought to you by Respond by Buffer and Sierra

The Social Support program has grown a lot with the new tool and since Sierra has been involved. Here are some highlights of the amazing work this team has been doing.

Top Responders: You have been busy, way to go!

We had a Social Support Sprint the second week of the release on November 18 and we loved having you.

November 30 there was a social responses made around this, “Firefox zero-day: Mozilla races to patch bug used to attack Tor browser users.” We responded to all of them.

Thanks for reading everyone, see you next release in January 2017! Happy Holidays in the meantime!