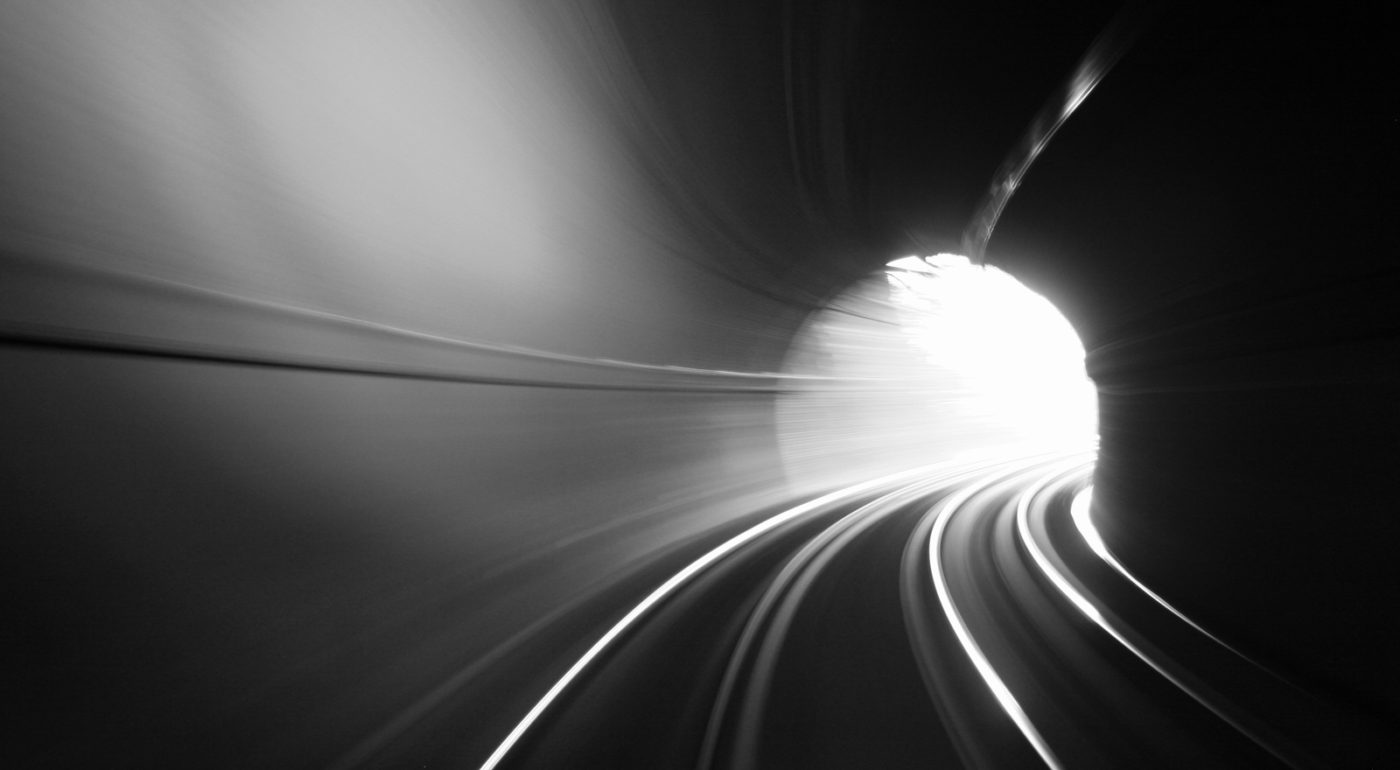 We’ve spent the past two weeks asking people around the world to think about our four refined design directions for the Mozilla brand identity. The results are in and the data may surprise you.

If you’re just joining this process, you can get oriented here and here. Our objective is to refresh our Mozilla logo and related visual assets that support our mission and make it easier for people who don’t know us to get to know us.

A reminder of the factors we’re taking into account in this phase. Data is our friend, but it is only one of several aspects to consider. In addition to the three quantitative surveys—of Mozillians, developers, and our target consumer audience—qualitative and strategic factors play an equal role. These include comments on this blog, constructive conversations with Mozillians, our 5-year strategic plan for Mozilla, and principles of good brand design.

Here is what we showed, along with a motion study, for each direction: 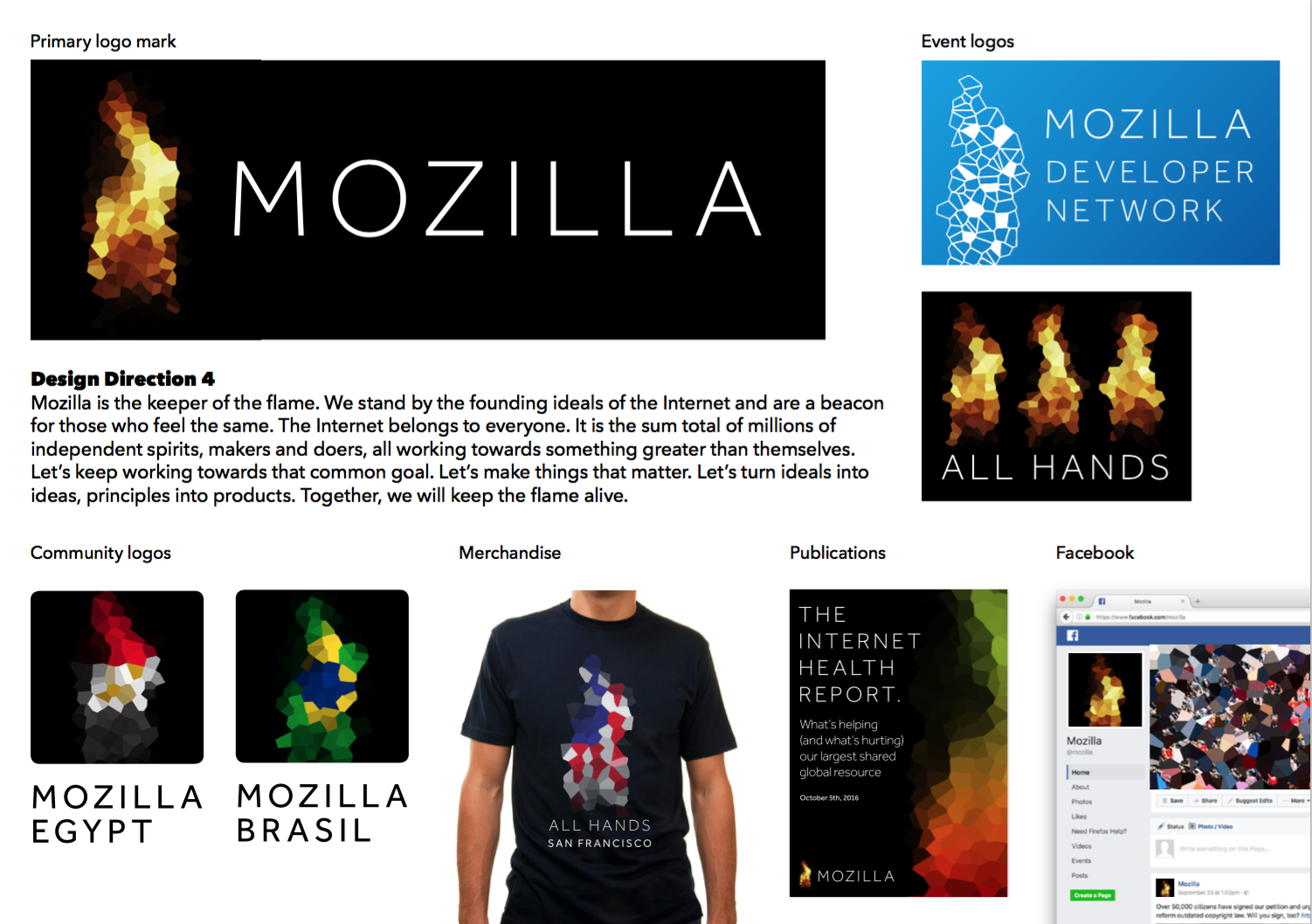 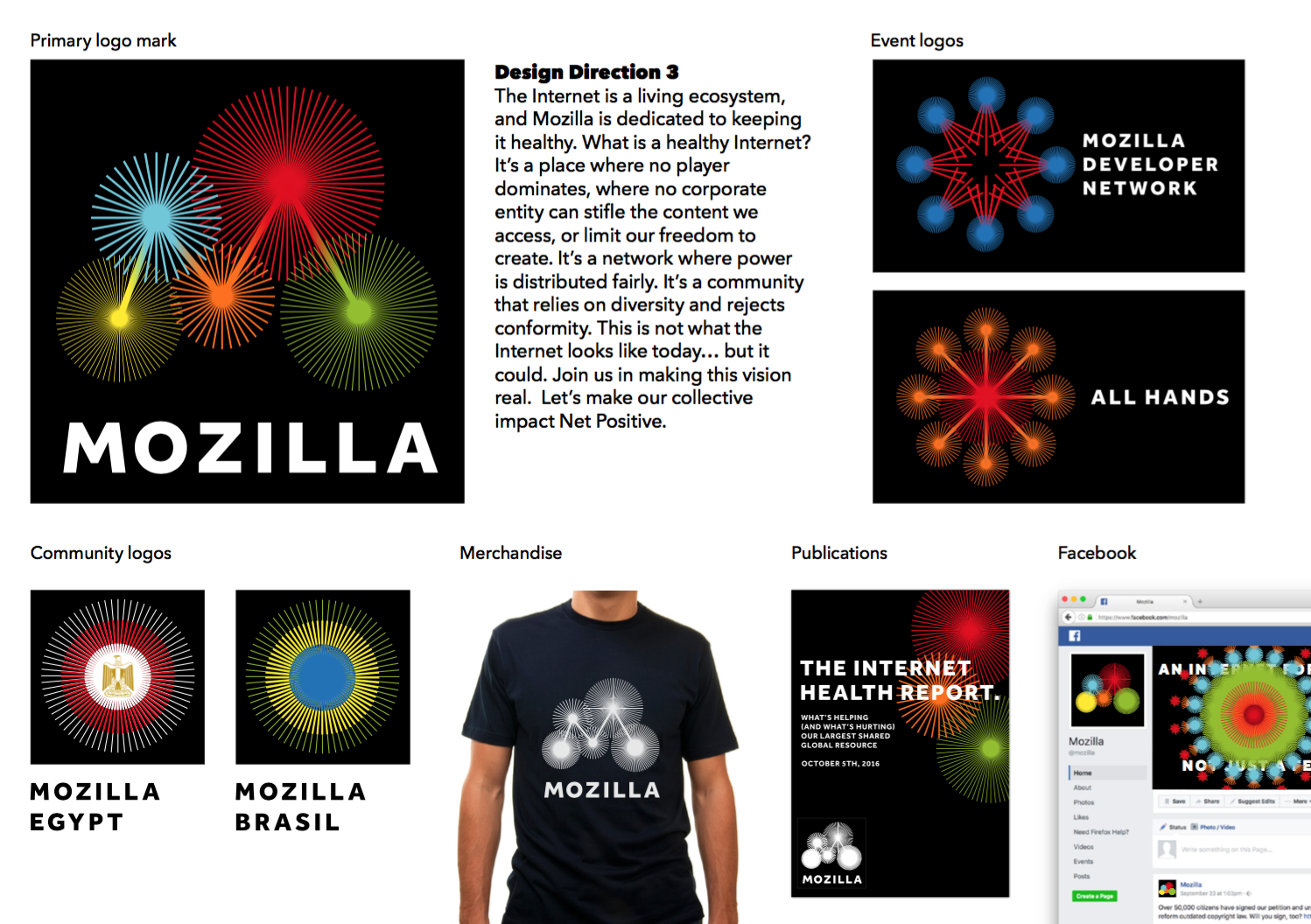 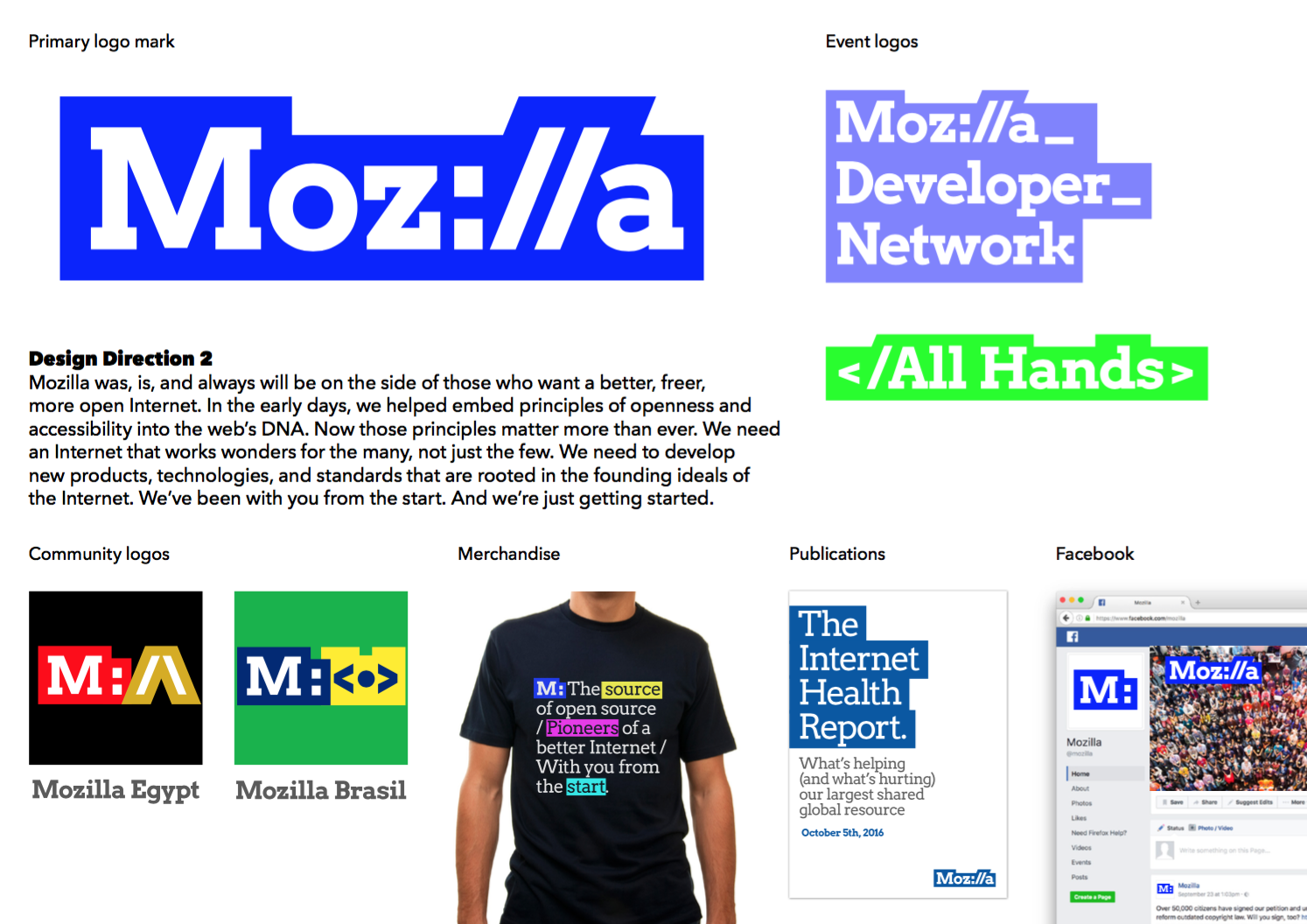 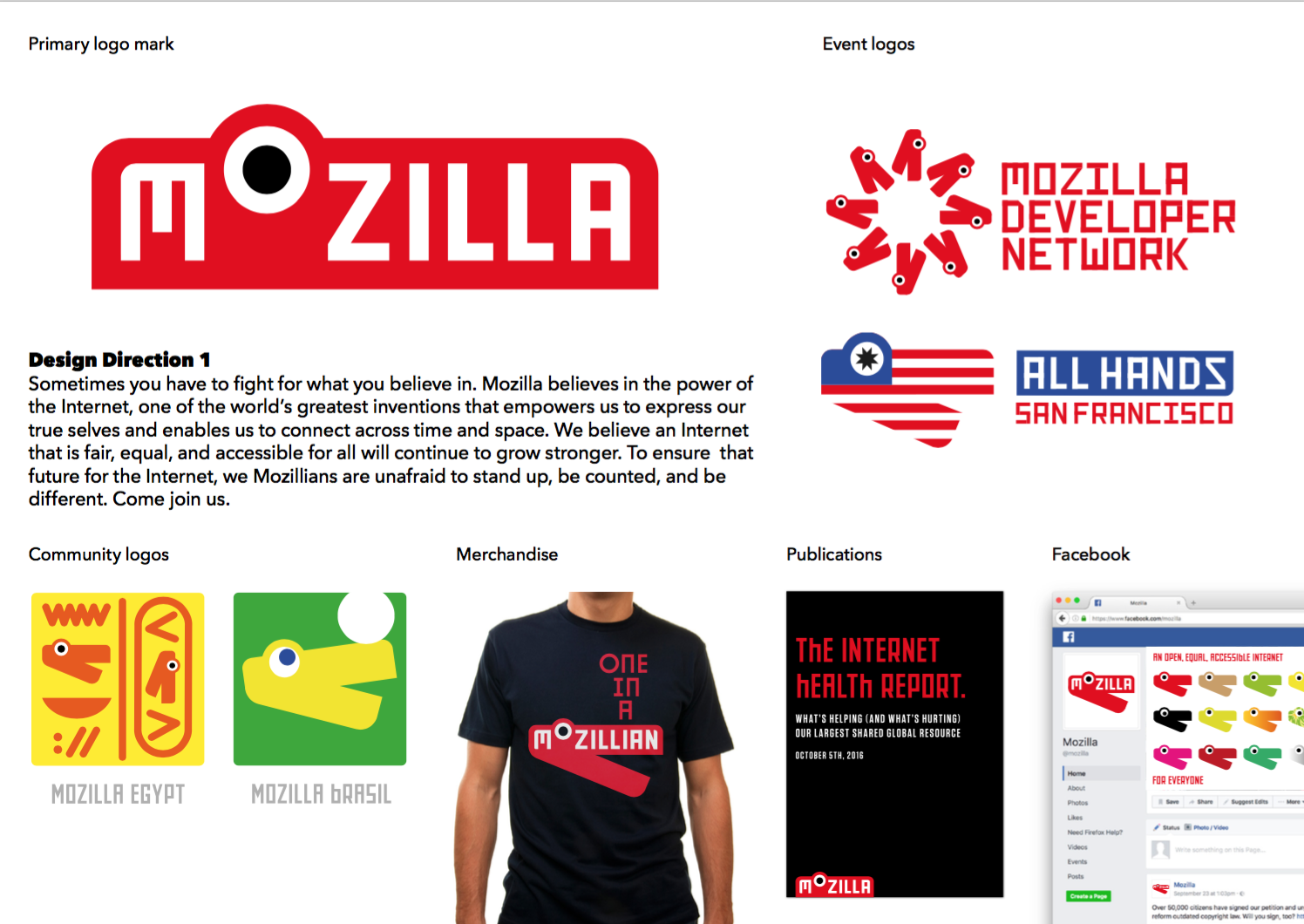 We asked survey respondents to rate these design directions against seven brand attributes. Five of them—Innovative, Activist, Trustworthy, Inclusive/Welcoming, Opinionated—are qualities we’d like Mozilla to be known for in the future. The other two—Unique, Appealing—are qualities required for any new brand identity to be successful.

Members of our Mozilla community and the developers surveyed through MDN (the Mozilla Developer Network) overwhelmingly ranked Protocol 2.0 as the best match to our brand attributes. For over 700 developers and 450 Mozillians, Protocol scored highest across 6 of 7 measures. People with a solid understanding of Mozilla feel that a design embedded with the language of the internet reinforces our history and legacy as an Internet pioneer. The link’s role in connecting people to online know-how, opportunity and knowledge is worth preserving and fighting for. 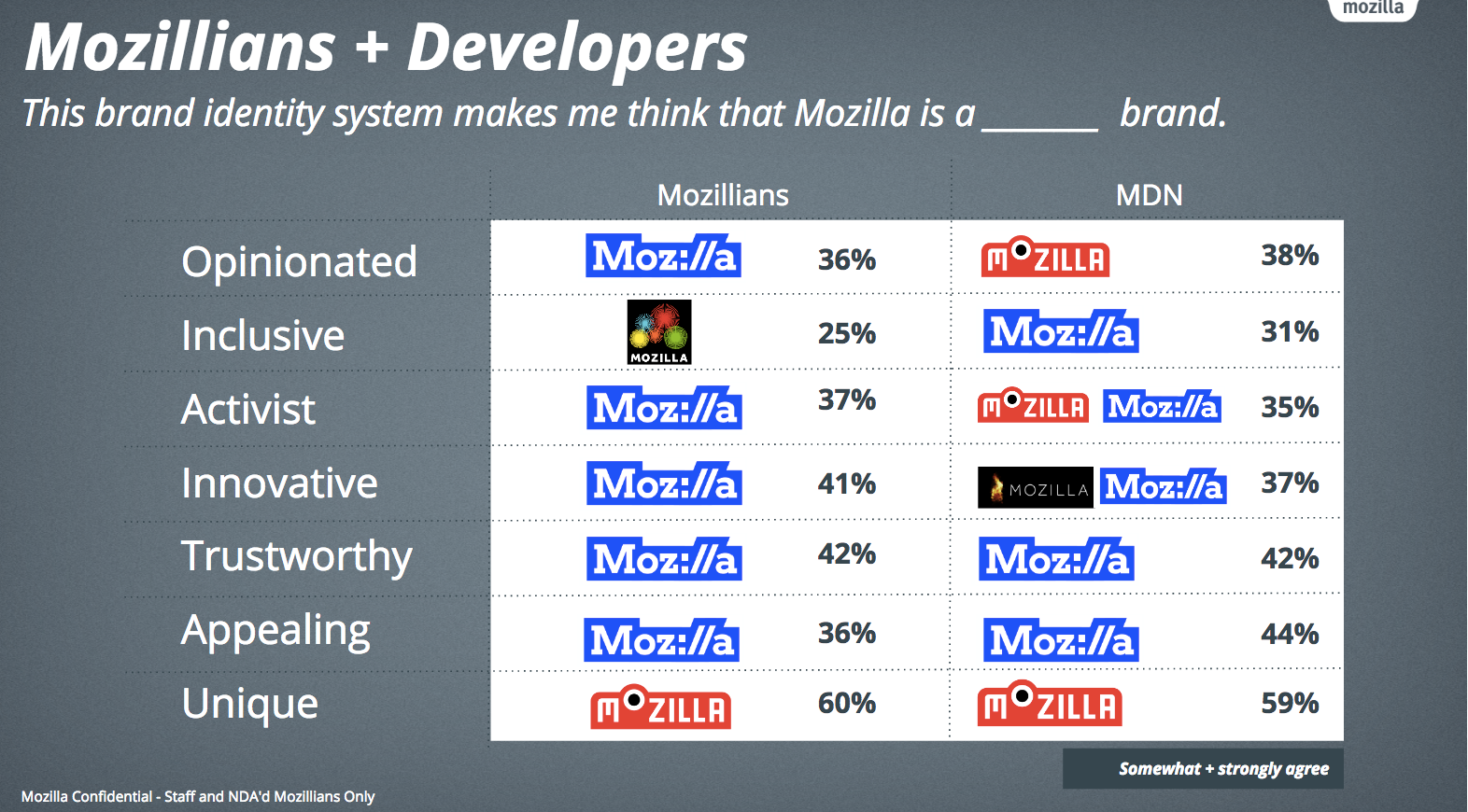 We surveyed people making up our target audience, 400 each in the U.S., U.K., Germany, France, India, Brazil, and Mexico. They are 18- to 34-year-old active citizens who make brand choices based on values, are more tech-savvy than average, and do first-hand research before making decisions (among other factors).

We asked them first to rank order the brand attributes most important for a non-profit organization “focused on empowering people and building technology products to keep the internet healthy, open and accessible for everyone.” They selected Trustworthy and Welcoming as their top attributes. And then we also asked them to evaluate each of the four brand identity design systems against each of the seven brand attributes. For this audience, the design system that best fit these attributes was Burst. 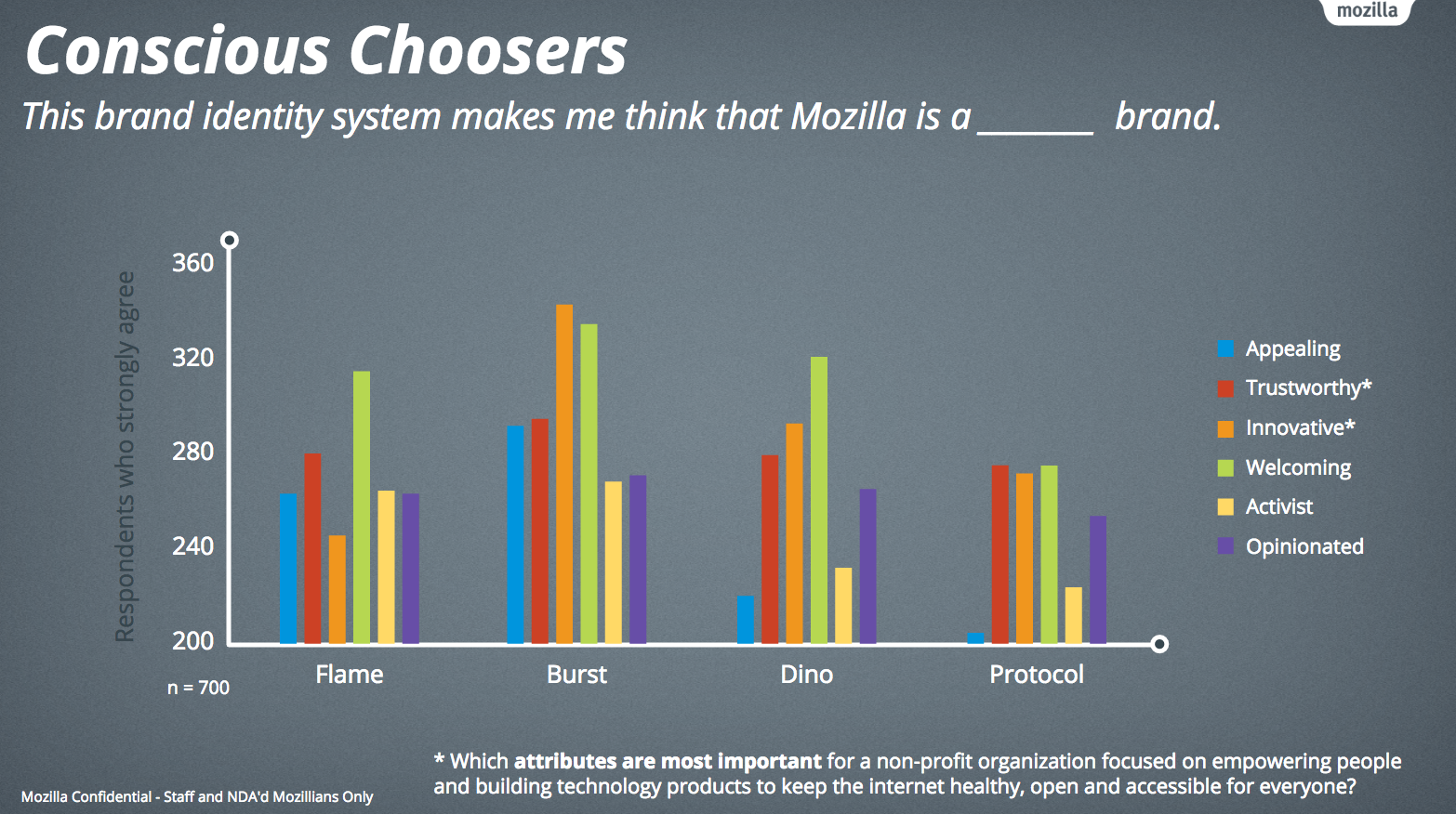 Why would this consumer audience choose Burst? Since this wasn’t a qualitative survey, we don’t know for sure, but we surmise that the colorful design, rounded forms, and suggestion of interconnectedness felt appropriate for an unfamiliar nonprofit. It looks like a logo. 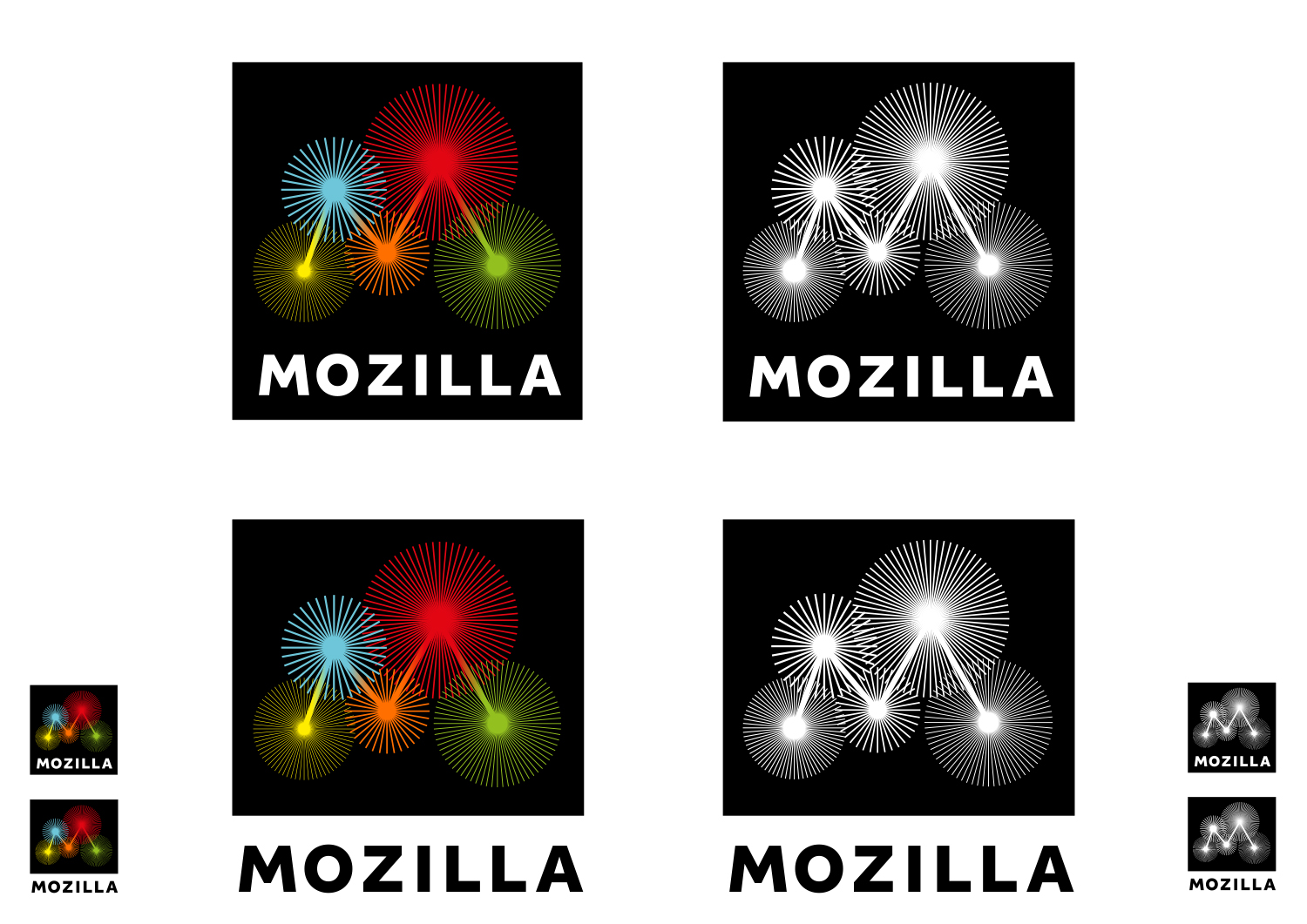 Why didn’t they rank Protocol more highly across the chosen attributes? We can make an educated guess that these consumers found it one dimensional by comparison, and they may have missed the meaning of the :// embedded in the wordmark. 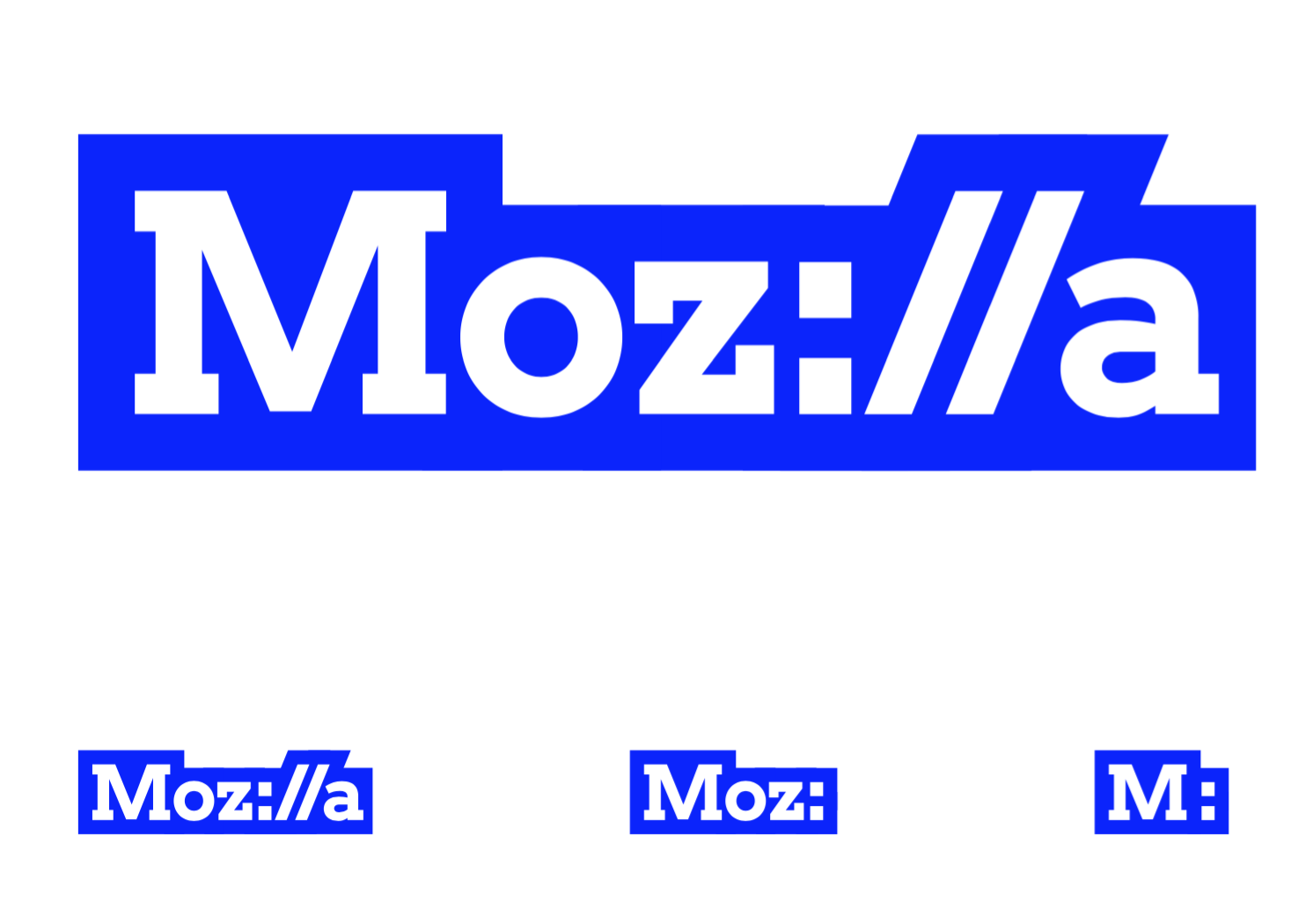 Although Dino 2.0 and Flame had their fans, neither of these design directions sufficiently communicated our desired brand attributes, as proven by the qualitative survey results as well as through conversations with Mozillians and others in the design community. By exploring them, we learned a lot about how to describe and show certain facets of what Mozilla offers to the world. But we will not be pursuing either direction.

Where we go from here.

Both Protocol and Burst have merits and challenges. Protocol is distinctly Mozilla, clearly about the Internet, and it reinforces our mission that the web stay healthy, accessible, and open. But as consumer testing confirmed, it lacks warmth, humor, and humanity. From a design perspective, the visual system surrounding it is too limited.

By comparison, Burst feels fresh, modern, and colorful, and it has great potential in its 3D digital expression. As a result, it represents the Internet as a place of endless, exciting connections and possibilities, an idea reinforced by the strategic narrative. Remove the word “Mozilla,” though, and are there enough cues to suggest that it belongs to us?

Our path forward is to take the strongest aspects of Burst—its greater warmth and dimensionality, its modern feel—and apply them to Protocol. Not to Frankenstein the two together, but to design a new, final direction that builds from both. We believe we can make Protocol more relatable to a non-technical audience, and build out the visual language surrounding it to make it both harder working and more multidimensional.

What do we say to Protocol’s critics who have voiced concern that Mozilla is hitching itself to an Internet language in decline? We’re doubling down on our belief in the original intent of the Internet—that people should have the ability to explore, discover and connect in an unfiltered, unfettered, unbiased environment. Our mission is dedicated to keeping that possibility alive and well.

For those who are familiar with the Protocol prompt, using the language of the Internet in our brand identity signals our resolve. For the unfamiliar, Protocol will offer an opportunity to start a conversation about who we are and what we believe. The language of the Internet will continue to be as important to building its future as it was in establishing its origin.

We’ll have initial concepts for a new, dare-we-say final design within a few weeks. To move forward, first we’ll be taking a step back. We’ll explore different graphic styles, fonts, colors, motion, and surrounding elements, making use of the design network established by our agency partner johnson banks. In the meantime, tell us what you think.