How do you save pages for later? That’s of the questions that user researchers at Mozilla have been investigating recently (see findings by Brian, Ilana, and Diane).

As a user experience design and engineering intern, I spent a good portion of this summer beginning to re-envision the latter part of that process: how do you access what you’ve saved? After all, what’s the use of saving something if it’s just going to collect dust in a list of hundreds of other things you’ve saved?

My research and design process began with a peek at Firefox’s existing Tab Groups feature and eventually moved into Bookmarks territory. I assessed Firefox’s current Bookmarks and History manager, whose interface hasn’t seen significant updates in a while. I looked at services like Pinterest, Tumblr, and Readability, which provide their own takes on the bookmarking paradigm. I made a hypothesis that the popularity of these services is a result of not just appealing social media features but also interfaces that take advantage of modern advances in usability.

Eventually, I found interface inspiration from a surprising source: the album grid and album list views in iTunes! The hardest obstacle in designing an interface for bookmarks is the sheer amount of information to represent in a clear and concise way. I listen to music pretty constantly while working, and one day, it occurred to me that music managers have to tackle a very similar problem and have some decent solutions that could inform this project.

While doing all this research, I generated plenty of ideas about bookmarks as well as paper wireframe designs. Then I took all this research and design to the code stage. The result is an experimental prototype called Mozaic that, while in no way complete or perfect, I hope will help inspire the future of browser bookmarks. 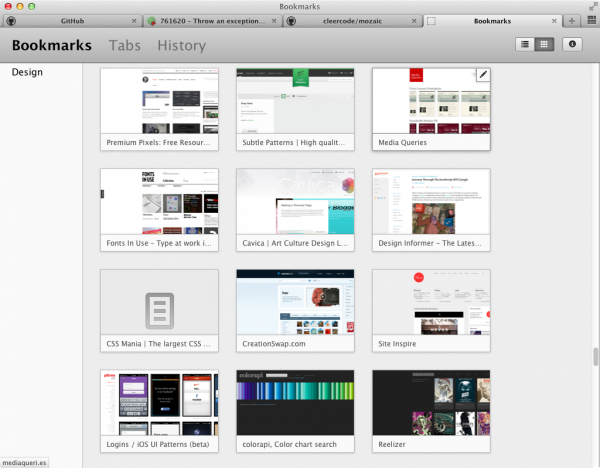 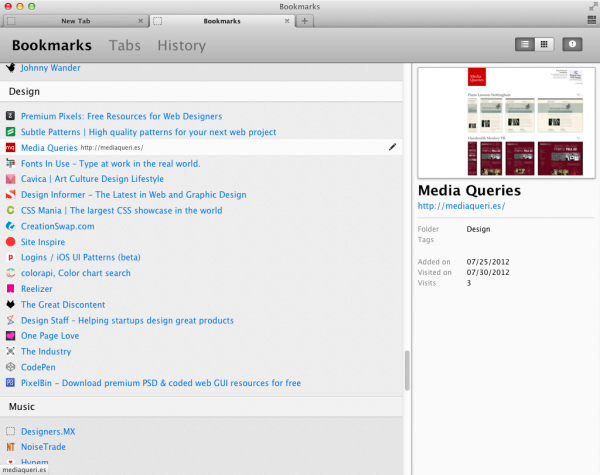 A few features of Mozaic:

If you’d like to find out more about the process of designing Mozaic, you can watch my presentation (at 24:30) or view the slides.

Or if you’d like to dive in and give it a try, you can! Although Mozaic is intended as a design prototype, it ended up as a decently functional add-on, so if you’re running certain cutting-edge versions of Firefox (compatibility is unfortunately a little unpredictable), you can try it out today! If you do, please comment below and let me know what you think.