Last week, the Firefox User Experience Team came together for a Concept Week to generate some big ideas for future Firefox features. Our user research team has conducted a number of great studies this year (such as Save for Later and Identity on the Internet), and we wanted to devote time to translate their insights into meaningful features for our users. Designers, design prototypers, and user researchers from our team set aside four days from our regular work to expand on ideas, especially those from previous brainstorming sessions. Our goal for the end of the week was to come up with detailed-ish design concepts that directly address some of the user needs we found in the field.

We’ll post some of the cool ideas we came up with soon, but for now, I wanted to share more about the unique structure of this Concept Week that I think made it successful despite the fact that we had some constraints (immigration, babies, travel fatigue, etc.) that prevented all of us from being in one physical location. 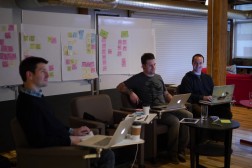 Four days is both a lot of time away from current projects (and looming deadlines) and yet, too little time for meandering on hypothetical problems. To get the most out of this Concept Week, we had to identify real user needs and come up with useful ideas quickly. Day 1 was a review of all our insights with some rapid brainstorming about the research in between each presentation. Towards the end of the day, we started clustering ideas to identify general themes that people might be interested in working on during the week.

One outcome of starting from the same research foundation was that we had a similar idea of the needs we were solving, so teams ended up with different but related ideas by Day 4. 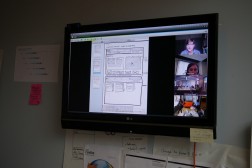 We needed to structure the week in a way that allowed us to generate the awesomeness that occurs when UX-ers come together, even though we were working from two main locations: San Francisco and Toronto.

We’ve learned from designing in Mozilla’s distributed environment that certain activities are relatively successful remotely, such as presenting work, and others that are still better in-person, such as producing work. So for this week, we met as a large group over video conference for sharing research and presenting our ideas, but we split up into small, local teams to do the actual concept creation and design work on Day 2 and 3. These teams chose an idea space they were interested in exploring and analyzed the problem further before diving into the actual solution.

This mix of big and small group interaction allowed us to stay on the same page throughout the week while generating a good number of thoughtful concepts.

3. Transplant Ideas and Mix Skills Up 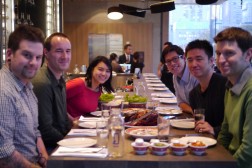 Part of the value of Concept Week is being able to build on others’ ideas and work with people we’re not regularly co-located with (I can hear my manager cheering “Synergies!!!” in the background). A couple of us spent the week in Toronto to introduce healthy disorder into the serene equilibrium of our local Canadian counterparts. I think some of our best ideas came from talking informally over touristy meals and then going back to the office and hacking on stuff.

We also tried to make sure we had people with a variety of skills at both locations. (We wanted to have a user researcher in Toronto, but plans fell through in the end.) In San Francisco, most of the teams that formed were a mix of researchers and designers, which enabled them to approach their topics with a variety of techniques. 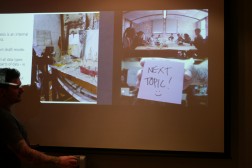 Before resorting to sticky notes, we tried charades… (The SF team had us muted while they were brainstorming.)

Though we tried to check in as a big group each day to make sure we were generally on the same page with what we were expected to come up with by Day 4, facilitating remote work is still a challenge. The time difference between Toronto and SF, as well as the difficulty of reading the energy of the room via video conference meant that it worked best to let each location set their schedule and decide on the activities they needed to do. It was interesting to see how this approach resulted in very different (but equally useful) concept presentations between the two locations in the end.

What Next?
Judging from the novel ideas that came out of this week and the excellent teamwork throughout, I’m calling this Concept Week a success! There are certainly things we can improve upon for future concept weeks (For example, more time to meet as a large group, maybe an extra day of hacking, figuring out the right balance between team and individual time, and more defined expectations of what Day 4’s presentations should look like), but I think it was a great experience for the team, and we got a lot of solid ideas from it.

We definitely want to continue building on last week’s momentum. We’re still figuring out the best way to continue developing our ideas now that we’re all back to our regularly scheduled work, but stay tuned for some of the concepts and reflections that our teams are going to post soon!