As the Perf-Tools team, we are responsible for the Firefox Profiler. This newsletter gives an overview of the new features and improvements we’ve done in Q3 2021.

This is our second newsletter and you can find the first one here which was about the H1 2021. With this newsletter, we wanted to focus on only Q3, so it would be less crowded and you can see the new features and improvements easily. I hope you enjoy the work that we’ve done this quarter.

Let’s get started with the highlights.

We had network markers for a while and we had both a network track in the timeline and a network chart in the bottom panel. It was working fine for a while but it was lacking some functionalities. Also, we had some correctness issues around the markers, like sometimes we were missing some network markers. We’ve worked on this task to improve both the Firefox Profiler analysis page and also the correctness of the values in the back-end.
Here are some of the things that we’ve done:

Highlight network markers in both the timeline and the network chart

Previously, network markers in the timeline and network chart were independent. When you interacted with one, it wasn’t changing the other one. After this work, when you hover over a network marker, the same marker in the other part will be highlighted. Here’s an example: 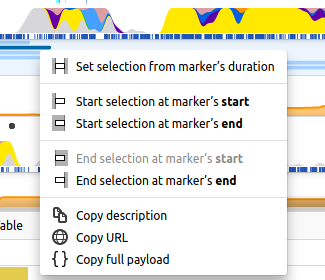 This is one of the improvements that we made in the back-end to make the data more consistent and accurate. Firefox profiler didn’t support the network request cancellations on service workers before. Now, you can see if a network request is being canceled and when.

Previously, we were doing some costly operations for sampling even when a thread is idle. With this work, we’ve reduced the overhead of profiling the sleeping thread dramatically. I’m not going to get into the details of this improvement since our colleague Gerald Squelart wrote a great blog post about it already. You can take a look at it here if you are curious about the optimization he came up with and the implementation details.

Firefox Profiler has an internal mutex inside of it. It is being used so other threads can modify the same data without any data loss or data race. But this mutex brings some overhead because when two threads need to add a marker at the same time, they both need to acquire the mutex lock. In that case, one of them had to wait for the other one. And this was bringing some overhead because of this mutex lock waiting time.
With this work, we’ve removed the need for mutexes from lots of places, including most importantly from marker recording sites.

We have three main functionalities with this API:

We also have documentation about this API in the Firefox source docs. Please take a look at it for more details and examples if you are interested. Also, we are going to be writing a blog post about this API soon. Stay tuned!

The timeline of the Firefox Profiler analysis page is very crucial to finding the data we are looking for. Inside the timeline, we have various registered processes and threads that Firefox had during the profiling session. When we have lots of tracks in the timeline, it might be hard to figure out which track we are interested in.

Previously, all the web content processes had a single name called “Web Content” or “Isolated Web Content” (when Fission is enabled). This is not explicit when it comes to figuring out a specific tab. This was implemented this way before because there wasn’t a way to determine the tab URL for a specific “Web Content” process. But with Fission, we precisely know which process belongs to which eTLD+1. After this work, we’ve started to show their eTLD+1 as their track name. This way, it will be a lot easier to determine which track you are looking for.

Here’s an example of before and after:

Firefox Profiler had Linux perf support for quite some time. We have this documentation about how to profile with it and how to import it.
Our contributor, Mark Hansen, made some great improvements on the Linux perf support to make it even better. Here are the things Mark Hansen improved:

Firefox Profiler now supports imports of dhat memory profiles. “dhat” is a dynamic heap analysis tool that is a part of the valgrind tools. It’s useful for examining how programs use their heap allocations. After this work, all you need to do is to drag and drop the dhat memory profile file into the Firefox Profiler and it will automatically import everything and load it for you. 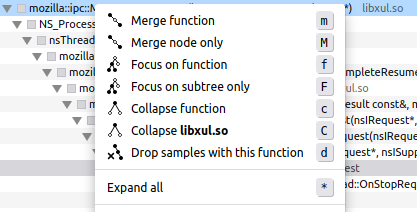 And here’s a list of contributors who helped on the localization of Firefox Profiler: