As the Perf-Tools team, we are responsible for the Firefox Profiler. This newsletter gives an overview of the new features and improvements we’ve made in the third quarter of 2022.

You can find the previous newsletter here which was about the first half of 2022.

Thanks to the new capabilities in Windows 11 and Apple Silicon, we can now capture the power use of Firefox while profiling. We gather this information into useful power tracks with tooltips showing both the instant power but also the energy in the current ranges:

This can be enabled by using the preset Power from the profiler popup: 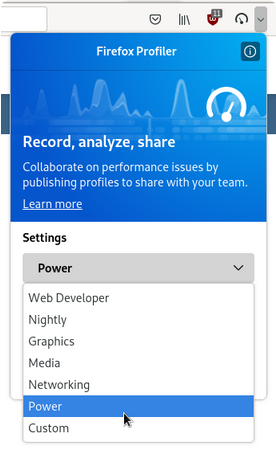 In October, the work continued to support this feature on Linux and Intel Macs.

Thanks Florian Quèze and Dan Robertson for working on this!

Improvements in the timeline

We’ve been busy improving the timeline (the top part of the profiler analysis UI) to make it easier to use when there are a lot of tracks.

Other changes and fixes

Improvements in the user interface

We also made some small usability changes in other parts of the interface, also with the help of a few contributors.

Some features and fixes related to importers were done, especially thanks to a few contributors:

And finally we achieved a few “under the hood” changes:

We are also thankful of our localization team:

Our translations happen on Pontoon, and you’re very welcome to contribute, either for an existing or for a new language.