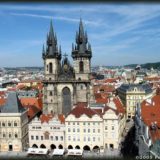 When I learned that I was going to co-organize the Prague L10n Hackathon, I was very excited. This would be my second visit. I wanted to see what had changed since the last time I was there. Upon arriving at the airport, I saw multilingual signs in Czech, English, Russian and Korean. When I got to the hotel, I saw lots of businessmen from the far East and a Chinese restaurant right across the street. Prague is far more globalized than it was a decade ago.

Our Prague L10n Hackathon on April 30 – May 1 united seven localizers representing these languages: Czech, Russian, Slovak, Upper and Lower Sorbians. Three localizers had not been to any Mozilla events prior, not to mention this was the first time for all of them meeting one another. I personally had worked with a few through email communications and bugzilla, so it was great to match the names with the faces. 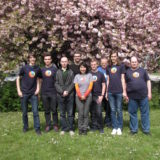 My colleague Matjaž started the two-day event by sharing the latest info on organization changes, including the most recent change in the localization team. He also updated the attendees with the latest in product roadmap, including the end of FFOS as in mobile phone and renewed focus of Firefox on iOS and Android. He covered the overall team goals of streamlining localization tools and repositories. We also touched on the importance of translation quality and the ways to drive that, such as establishing locale-specific style guides and terminology lists. Having these should help recruiting and onboarding new localizers as well as keeping consistency of great work done by multiple contributors.

The Czech team used the opportunity to brainstorm about wireframe and discuss ideas around redesigning the translation interface of Pontoon. We took notes, filed bugs and fixed some of them. Good news, just a few days after the hackathon, Michal Vašíček and Victor Bychek of the Russian community both submitted their first patches to Pontoon!

In addition to working on team goals separately, all of us sat together sharing stories on how they got involved, what they had tried for community outreach, and the challenges they faced in recruiting and retaining localization contributors. No wonder during the Spectrogram, most agreed that it was easier to train someone to be technical than to become a better translator. Some of them had been long time Mozillians, working tirelessly behind the scenes. More than half were fairly new. The majority of the attendees were students or just fresh out of college. Michal Vašíček was the youngest of all, only 14 years old, with lots of great ideas. Michael Wolf single-handedly covered two locales all by himself.  He finished a few projects over the weekend.  Tomáš Zelina was supposed to spend the weekend studying for his high school exams; he came anyway. He wouldn’t pass up a chance to meet and collaborate with his community, in addition to practicing some English. Juraj Cigáň was the sole representative for Slovak, but he found common interests and challenges with the Czech community, not just linguistically.  Alexander Slovesnik, a long time Mozillian and Victor Bychek, a college student of Russia lived more than 1000km from one another.  Such event would make their first face to face meeting possible.

Our local rep Michal Stanke was new in this role though a veteran as a localizer. He helped us with identifying and securing the venue, providing info on transportation, arranging dining options that highlighted authentic Czech cuisines and the famous beers the country was known for. All the contributors stayed in an AirBnb which was just walking distance away from the venue. We wrapped up our event by taking an evening walk from the Old Town to the Prague Castle and beyond. We wondered which community would host the event next year. We all looked forward to a different city and perhaps a different country with more new contributors attending.