In Firefox there are two main user facing settings related to languages:

The difference between the two is not as intuitive as it might seem. A lot of users change the web content settings, and expect the user interface to change.

While the preferences for web content have been exposed in Firefox since its first versions, changing the language used for the user interface has always been challenging. Here’s the painful journey users had to face until a few months ago:

The alternative is to install a build of Firefox already localized in your preferred language. But, once again, they’re not so easy to find. Imagine you work in a corporate environment that provides you with an operating system in English (en-US). You search the Web for “Firefox download”, and automatically end up on this download page, which doesn’t provide information on the language you’re about to download. You need to pay a lot of attention and notice the link to other languages.

If you already installed Firefox in the wrong language, you need to uninstall it, find the installer in the correct language, and reinstall it. As part of the uninstall process on Windows, we ask users to volunteer for a quick survey to explain why they’re uninstalling the browser, and the amount of them saying something along the line of “wrong language” or “need to reinstall in the right language” is staggering, especially considering this is an optional comment within an optional survey. It’s a clear signal, if one was ever needed, that things need to improve.

Everything Changes with Firefox 65

We introduced a new Language section. Directly from the General pane it’s now possible to switch between languages already available in Firefox, removing the need for manually setting preferences in about:config. What if the language is not available? Then you can simply Search for more languages… from the dropdown menu. 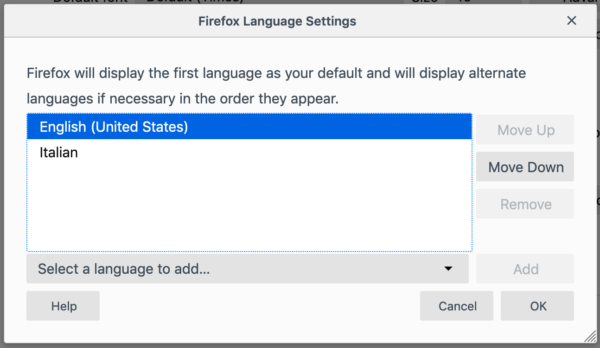 Add your preferred language to the list (French in this case). 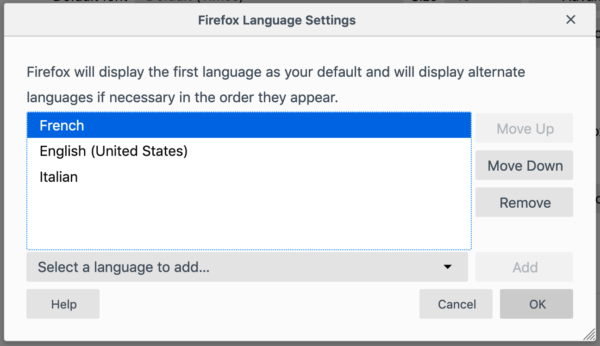 And restart the browser to have the interface localized in French. Notice how the message is displayed in both languages, to provide users with another hint to the user that they selected the right language.

If you’re curious, you can see a diagram of the complete user interaction here.

A lot happens under the hood for this brief interaction:

This feature is enabled by default in Beta and Release versions of Firefox. Language packs are not reliable on Nightly, given that strings change frequently, and a language still considered compatible but incomplete could lead to a completely broken browser (condition known as “yellow screen of death“, where the XUL breaks due to missing DTD entities).

First of all, there are still a few bugs to fix (you can find a list in the dependencies of the tracking bug). Sadly, there are still several places in the code that assume the language will never change, and cache the translated content too aggressively.

The path forward has yet to be defined. Completing the migration to Fluent would drastically improve the user experience:

There are also areas of the browser that are not covered by language packs, and would need to be rewritten (e.g. the profile manager). For these, the language used always remains the one packaged in the build.

The user experience could also be improved. For example, can we make selecting the language part of a multiplatform onboarding experience? There are a lot of hints that we could take from the host operating system, and prompt the user about installing and selecting a different language. What if the user browses a lot of German content, but he’s using the browser in English? Should we suggest them that it’s possible to switch language?

With Firefox 66 we’re also starting to collect Telemetry data about internationalization settings – take a look at the table at the bottom of about:support – to understand more about our users, and how these changes in Preferences impact language distribution and possibly retention.

For once, Firefox is well ahead of the competition. For example, for Chrome it’s only possible to change language on Windows and Chromebook, while Safari only uses the language of your macOS.

This is the result of an intense cross-team effort. Special thanks to Zibi Braniecki for the initial idea and push, and all the work done under the hood to improve Firefox internationalization infrastructure, Emanuela Damiani for UX, and Mark Striemer for the implementation.