As anticipated in the previous edition of the L10N Report, Firefox 70 is going to be a large release, introducing new features and several improvements around Tracking Protection, privacy and security. The deadline to ship any updates in Firefox 70 is October 8. Make sure to test your localization before the deadline, focusing on:

Be also mindful of a few last-minute changes that were introduced in Beta to allow for better localization.

If your localization is missing several strings and you don’t know where to start from, don’t forget that you can use Tags in Pontoon to focus on high priority content first (example).

Upcoming changes to the release cycle

The current version of the rapid release cycle allows for cycles of different length, ranging from 6 to 8 weeks. Over two years ago we moved to localize Nightly by default. Assuming an average 6-weeks cycle for the sake of simplicity:

A few days ago it was announced that Firefox is progressively moving to a 4-weeks release cycle. If you’re focusing your localization on Nightly, this should have a relatively small impact on your work:

The cycles will shorten progressively, stabilizing to 4 weeks around April 2020. Firefox 75 will be the first one with a 4-weeks cycle in both Nightly and Beta. 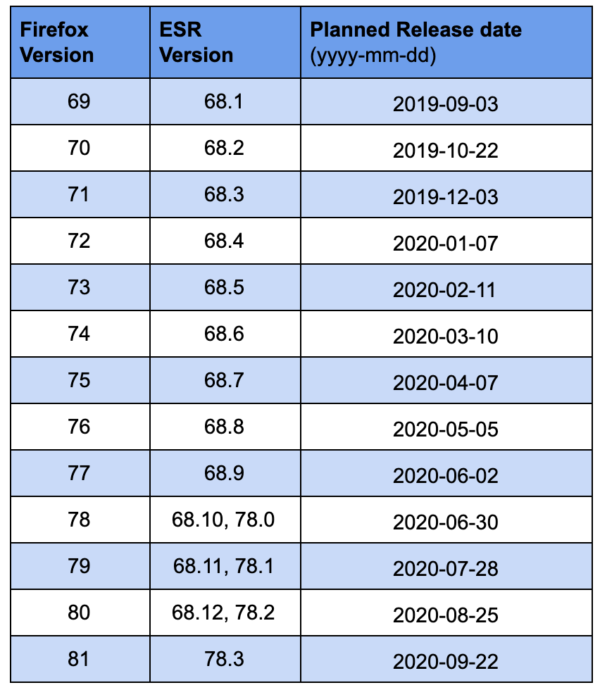 While this shortens the time available for localization, it also means that the schedule becomes predictable and, more importantly, localization updates can ship faster: if you fix something in Beta today, it could take up to 8 weeks to ship in release. With the new cycle, it will always take a maximum of 4 weeks.

A lot more strings have landed since the last report.  Please allocate time accordingly after finishing other higher priority projects. An updated deadline will be added to Pontoon in the coming days. This will ensure localized content is on production as part of the October launch.

A few pages have been recently added and more will be added in the coming weeks to support the major release in October. Most of the pages will be enabled in de, en-CA, en-GB, and fr locales only, and some can be opted-in. Please note, Mozilla staff editors will be localizing the pages in German and French.

We have quite a few updates in legal documentation. If your community is interested in reviewing any of the following, please adhere to this process: All change requests will be done through pull requests on GitHub. With a few exceptions, all the suggested changes should go through a peer review for approval before the changes go to production.

Due to recent merge to a single Bengali locale on the product side, the articles were consolidated as well. For the overlapped articles, the ones selected were based on criteria such as article completion and the date of the completion.

What’s new or coming up in SuMo

Translation Memory (TM) matching has been improved by changing the way we store Fluent strings in our TM. Instead of storing full messages (together with their IDs and other syntax elements), we now store text only. Obviously, that increases the number of results shown in the Machinery tab, and also makes our TMX exports more usable. Thanks to Jordi Serratosa for driving this effort forward! As part of the fix, we also discovered and fixed bug 1578155, which further improves TM matching for all file formats.

As part of fixing bug 1578057, Michal Stanke discovered a potential speed up for saving translations. Specifically, improving the way we update the latest activity column in dashboards resulted in a noticeable speedup of 10-20% for saving a translation. That’s a huge win for an operation that happens around 2,000 times every day. Well done, Michal!